While his teammates were parading down the Canyon of Heroes celebrating their 1986 World Series victory, Dwight Gooden was holed up in his apartment watching the proceedings on television, too high to attend after partying all night and doing large amounts of cocaine in a housing project on Long Island. This low moment — Gooden describes it as “missing what should have been the greatest morning of my life” —  in the life of the man who could have been the greatest pitcher of all time begins his new book, “Doc: A Memoir,” which goes on sale on June 4. 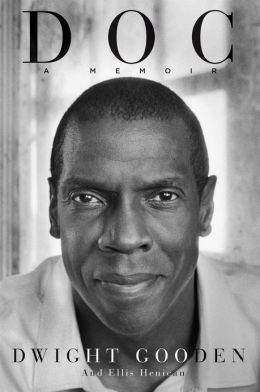 It is a thoroughly enjoyable book; well, maybe “enjoyable” is not the right word. More than anything, the book chronicles his decades-long battle with cocaine. Dwight Gooden pulls no punches — the book jacket calls it a “brutally honest memoir” and that is exactly what it is. From the drugs, prison time, his failings as a father and a phony suicide attempt, Gooden tells his story, along with co-author Ellis Henican,  without sugarcoating anything. It is sometimes difficult to read about the fall of someone whom everybody describes as a great man, but there is redemption at the end; after several failed attempts at rehab, he finally succeeds, thanks to the reality TV show “Celebrity Rehab,” of all things.

Of course, Mets fans will be interested in his stories about his baseball career and his time in Flushing. Gooden does that as well, writing about the veterans who took a 19-year-old rookie under their wings. He said Keith Hernandez  was a mentor, teaching him how to pitch to hitters. Mike Torrez was also a great help when it came to pitching. Rusty Staub gave him lessons on how to act like a major leaguer. And perhaps most importantly, Hubie Brooks showed him how to deal with all of the girls who wanted to be with ballplayers.

The conventional wisdom is that Dwight Gooden threw his career away for cocaine. Reading the book, I don’t think that’s the case. His career spiral had more to do with overuse and injury than drugs. It should be noted that Gooden does not say this — this is my own opinion.

Here are the facts: Gooden started using cocaine after the 1985 season, so he was clean his first two incredible Mets seasons. He was using all through the 1986 season and went 17-6 with a 2.84 ERA and 200 strikeouts — a pretty good year. Gooden says he never, ever pitched while high or used cocaine on days he pitched.

Gooden tested positive for cocaine prior to the 1987 season and missed the first two months while in rehab. Still, he came back to pitch to a 15-7 record with a 3.21 ERA in 25 starts. Gooden says he never used cocaine again until 1994, so the rest of his Mets career was not effected by drugs.

He went 18-9 in 1988, and in 1989 the arm troubles began. He was diagnosed with a small muscle tear in his shoulder and spent two months on the disabled list. This can be traced back not to drugs but to the fact that Gooden averaged 235 innings per season in his first five years. He said his pitch count “was often 130, 140, even 150.”

Dwight Gooden came back to win 19 games in 1990, but his 1991 ended in September when he was diagnosed with a partial rotator cuff tear that required surgery. He pitched full seasons in 1992 and 1993, but he had losing records both seasons and his strikeouts were way down.

So Gooden was beginning to lose steam before 1994, when he hurt his foot kicking a bat rack after famously serving up three home runs to the immortal Tuffy Rhodes on Opening Day in Wrigley. He was placed on the DL, started using cocaine again and was suspended for the rest of the season as well as all of 1995. His Mets career was over.

Dwight Gooden came back in 1996 but was never the same. He says he didn’t use drugs again until he retired after the 2000 season, so cocaine was not to blame. Perhaps missing 1995 was the beginning of the end. That was indeed caused by his cocaine use, so you can make the case that drugs ruined his career. But he was clearly slowing down several years before that, so you could also make the case that injury, not drugs, caused his downfall.

In any case, Dwight Gooden also writes extensively about his relationship with Darryl Strawberry. From the outside it seemed like they were the best of pals, but apparently that was not the case. Gooden writes that Strawberry always seemed jealous that he had to share the spotlight with Gooden, writing:

Before I got there, it was all Darryl, Darryl, Darryl. He was the player everyone was talking about. I’m not sure he liked it when people started saying, “Darryl and Doc.”

Gooden said Strawberry often said nasty things behind his back, culminating in 1992 when Strawberry suggested in his autobiography that Gooden was using cocaine during the 1986 World Series. Gooden denied it and Strawberry apologized, blaming it on his co-author. Strawberry has continued to say false things about Gooden throughout the years, Gooden claims.

Gooden doesn’t throw Strawberry under the bus like Strawberry did to him, but Gooden still seems genuinely upset and hurt by Strawberry’s actions. The topic comes up several times in the book. He said they are cordial when they run into each other, but “at this point, we have no relationship at all.”

I can’t recommend this book more highly. It is sad but also inspiring because through it all, Dwight Gooden remains a decent person, and in the end is able to beat his addiction. Gooden points out it is an ongoing battle, a battle we all hope he continues winning.

THE Review: “Willie Mays: The Life, The Legend”

THE Review: “The Fight of Their Lives”

THE Review: “The Mendoza Line”