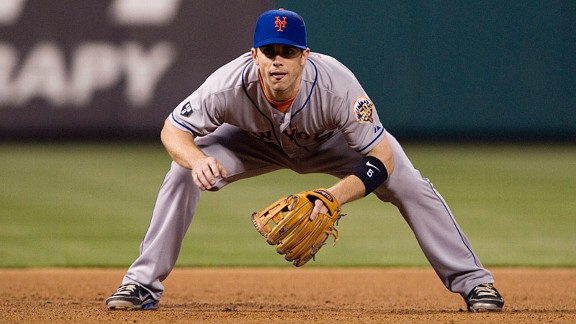 David Wright and Eric Young have been named as finalists for Gold Glove Awards at their respective positions, MLB announced on Friday.

It would be ironic if Wright won this year, a season in which he missed seven weeks with injury. That’s because he should have won last season but was inexplicably passed over for the far inferior Chase Headley. Wright will compete with the Rockies’ Nolan Arenado and Juan Uribe of the Dodgers. For some reason offensive numbers are important to voters for the defensive award (which is why Headley won last year), and Wright had far better batting stats than Arenado and Uribe, despite missing so much time. Wright won the Gold Glove in 2007 and 2008 and is overdue for another one.

As far as Young, he is up against Carlos Gonzalez of the Rockies and Pittsburgh’s Starling Marte in left field. Young will probably fall into the “it’s an honor just to be nominated” category as he will not win. In fact, even though Young is an excellent fielder, it was a bit of a surprise that he made the final three.

Juan Lagares failed to make the cut in center field despite a league leading 14 assists. He was likely hurt by only playing a little more than half a season. It doesn’t matter — Carlos Gomez is going to win it, anyway. But don’t worry, Lagares will get his chance for a Gold Glove in the years to come. He’s that good.

The winners will be announced live on ESPN2 Tuesday night at 7 PM Eastern time.

David Wright Out with Stiff Neck