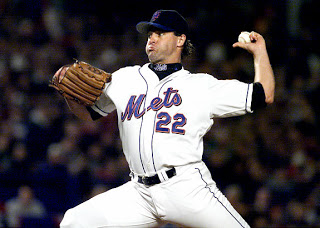 Well, that headline is more provocative than I intended, but it is true! Appearing on MLB Tonight on Wednesday, former Met Al Leiter said when he was with the Mets and spent off-seasons in New York, he would keep his arm pitching-ready by having catches with random dudes from the gym.

The subject came up following a story that Gio Gonzalez has been working out in Florida with Jorge Posada. Host Fran Charles asked Leiter and Ron Darling what they did in their off-seasons to keep sharp. Darling worked with a coach, but Leiter said he used to bring an extra glove to the gym. He said he had a couple of guys to whom he would routinely throw, but if they were not around, he would just ask anyone.

How cool would that have been for any Mets fan, having a catch with the team’s ace? We all would have killed to be one of his catchers. I lived in Manhattan during Al Leiter’s time with the Mets, but apparently he did not frequent my Manhattan gym. Damn!

It’s not quite Willie Mays playing stickball with kids in the streets of Harlem, but it is an interesting little tidbit.

Jimmy Rollins Would have Played for Mets

Back at Citi Field, with a Little Help from Strangers

New Year’s Resolution for Mets: Level with Us