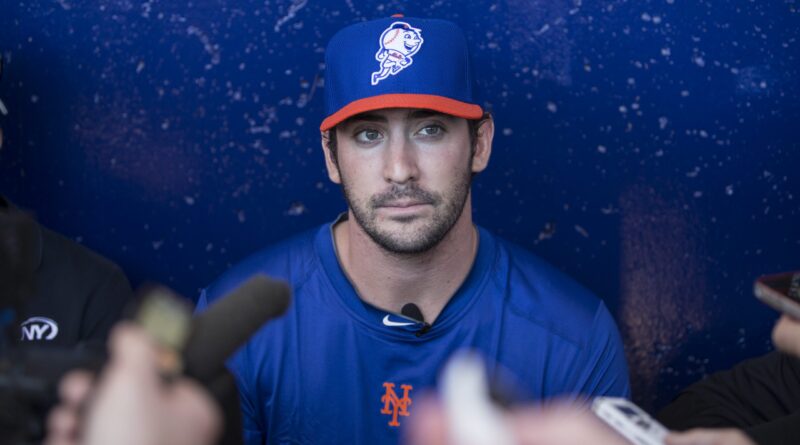 The Mets continue to alienate Matt Harvey, this time interrupting an interview Tuesday in apparent violation of the team’s edict that Harvey not talk to the media one-on-one.

Andy Martino of the Daily News writes that he approached Harvey Tuesday morning to ask him why he would prefer to rehab in New York rather than in Florida, where the Mets want him to remain.

“The biggest part is wanting to stay with the team. To learn the league. To learn Travis (d’Arnaud).  To learn how to bond with the other starting pitchers, and the guys in the clubhouse, and the David Wrights who I plan on playing with.”

He went on. “I expressed that seven months in Port St. Lucie is a long time. For me, I strongly felt that my best opportunity, and my motivation to come back quicker, stronger, work harder would be to be with the teammates. That’s kind of what I have always said.”

Matt Harvey implied that he is not happy with the way the Mets have treated him this spring.

At some point Mets PR chief Jay Horowitz came over and was clearly not happy that Harvey was talking to Martino. But Harvey was having none of that.

“Jay,” Harvey said. “If somebody needs to talk to the Players’ Association, I have a right to have him writing about me.”

Martino says at that point he left. He writes that Sandy Alderson tracked him down later and explained the alleged interview restrictions. He said there really are none, but that he prefers that Harvey speak in a group to save time.

“My recommendation is to manage doing interviews in a way that doesn’t interfere with his day-to-day activities,” Alderson said.

Matt Harvey also tracked down Martino to tell him that he spoke to Alderson and that Harvey feels much better.

So what does this all mean? It means that the Mets have still not learned how to avoid alienating their own players. It really is not that difficult — just do not impose ridiculous rules on their players and treat them like men. Simple as that.

Matt Harvey: If Not Now, When?

Biggest Mets Lie of All

One thought on “Matt Harvey vs. Mets”