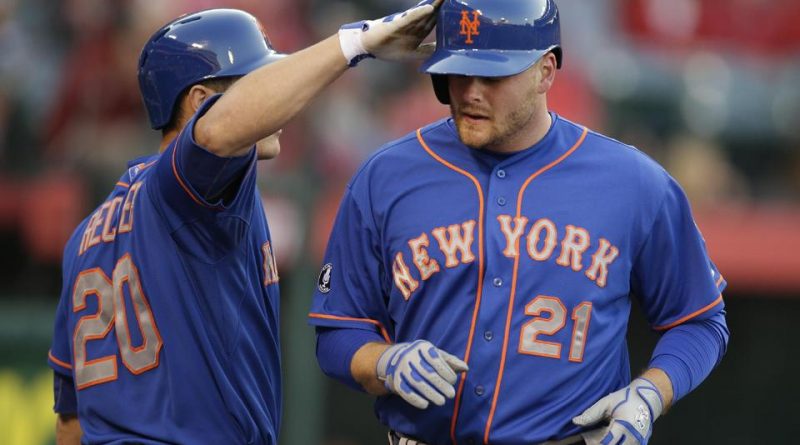 Jose Valverde was the only Mets reliever who has not disappointed this season. Well, not anymore. He allowed a two-out, game tying three-run home run in the ninth inning, but his teammates bailed him out by winning it in the 13th inning.

Once again Eric Young led off the game by getting on base, this time with a walk. He stole second, his sixth steal on the season to tie him for second in the National League. He moved to third on a ground out. David Wright then lofted a fly ball to old pal Collin Cowgill in short left. Young took off, but Cowgill unleashed a perfect throw to nail Young at the plate.

Cowgill led off the bottom of the first against Jonathon Niese with a grounder to short. Omar Quintanilla’s throw to first was too high, but Cowgill probably would have beaten it anyway and it was scored a single. He moved to second on an out and scored on an Albert Pujols single to give the Angels an early 1-0 lead.

The Mets promptly tied the score in the top of the second when designated hitter Lucas Duda hit a solo shot to center for his third home run on the season.

The Mets had something going in the fourth, but once again they made an out on the basepaths. With one out, Jered Weaver walked Wright and Curtis Granderson. They attempted a double steal and Wright was thrown out at third. Ike Davis flew out to end the inning.

Chris Iannetta broke the tie in the fifth with a home run to left center that just seemed to keep going to give the Angels a 2-1 lead.

Not done with his old team, Cowgill decided to hit a solo home run to lead off the sixth to extend the Angels lead to 3-1.

Granderson walked with one out in the seventh, and when Duda singled with two outs there were runners on first and third. Juan Lagares, the only dependable bat in the lineup these days, came through once again with a single to score Granderson and make it a 3-2 game. That was all for Weaver, who allowed just three hits but four walks in his 6.2 innings. Fernando Salas came on, but on a 3-2 count Anthony Recker was able to hit a liner to center that was just out of the reach of Mike Trout. Two runs scored to give the Mets the lead, 4-3.

Jonathon Niese pitched into the eighth inning in his second start of the season, getting one out before being pulled. He allowed three runs on six hits in his 7.1 innings with five strikeouts and a walk.

The Mets padded the lead in the ninth. They loaded the bases on two walks and single and then Quintanilla singled to score two runs to make it a more comfortable 6-3 lead.

Jose Valverde got the first two outs in the ninth but then allowed a walk and a single. Up stepped Raul Ibanez, two months shy of his 42nd birthday and one hit shy of 2000. He achieved the milestone in a memorable way with a three-run bash to right to tie the game at six.

So we were off to extra innings for a second straight night. Things were quiet until the Mets loaded the bases on a single and two walks with two outs in the 12th. But Lagares struck out to end the threat.

The Mets grabbed the lead in the 13th inning when Recker took a high fastball deep into the Anaheim night for a solo home run. Quintanilla followed with a single, his third hit of the game. The replacements for Ruben Tejada and Travis d’Arnaud went a combined 5-11 with five RBIs. Young sacrificed Quintanilla to second. Daniel Murphy capped off an 0-7 night with his third strikeout for the second out. Quintanilla moved to third on a wild pitch But Wright flew out to end the inning.

So it was up to John Lannan, in his second inning of work, to protect the slim one-run lead. And he was up to the task, retiring the Angels in order, including Trout on a liner to first for the final out.

One thought on “Mets Beat Angels in 13”