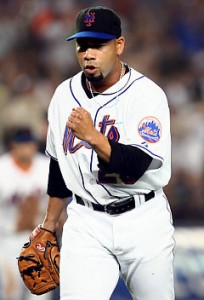 When will Jerry Manuel learn that Pedro Feliciano should never, ever pitch to right handed hitters? Now, I am not big on the whole lefty/righty thing. But Feliciano is the classic lefty specialist  — he’s murder on left handed hitters, but righties kill him.

In Thursday night’s game in Washington, Manuel brought Feliciano in to start the ninth inning of a game tied at one. The first hitter, righty Will Nieves, grounded out. So Feliciano was okay there. Next was pinch hitter Willie Harris, a lefty. The Met killer should have been easy prey for Feliciano. Instead, he walked him. Next, lefty Nyjer Morgan reached first on a bunt single.

Feliciano had failed to retire two lefties — the guys he was supposed to get out. With switch hitter Christian Guzman up next, batting righty of course, Manuel left in. And Guzman promptly singled to load the bases.

Finally, Manuel lifted Feliciano with righty Ryan Zimmerman up next, but it was too late — Zimmerman’s sac fly won the game for the Nationals.

Feliciano should never have been allowed to face Guzman. In fact, he should never face a righty. Between 2007 and 2009, lefties are hitting .201 against Feliciano with a .295 slugging percentage. Against righties, those numbers are .274 and .458. This season’s splits are more of the same — lefties hitting .232, righties .308.

Feliciano has lobbied for the eighth inning job, but he’s proven he should not get it. He should just stick to coming in to pitch to one or two lefties, then getting out of the game while the getting is good. When will Manuel figure that out? 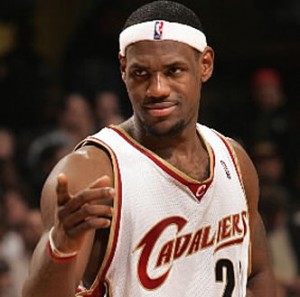 It’s not baseball, but let’s talk LeBron James for just a moment. I predict James will stay in Cleveland. But if he does leave, he will sign with the Knicks. No way does James leave his home state to play in Miami or Chicago. If James does indeed have a lifelong dream to play in New York, as some suspect, then he’s Garden-bound. And he’s not signing with the Nets, either. The Nets will always be the number two team in town, whether James signs with them or not, whether they play in Brooklyn or Newark.

Incidentally, I never bought the conventional wisdom that if James won a championship with Cleveland he would stay, and if he didn’t, he would leave. I thought  just the opposite. If he won, he could say, “Hey Cleveland, I delivered a championship like I promised. Now I’d like to follow a few dreams of my own.” I think it would be harder for him to leave without winning one for his town. That’s why I was rooting hard for the Cavaliers during the playoffs.

So that is my prediction. I should point out I am usually wrong about these things.

Mets Come Back to Beat Reds

Gee, You Can’t Win em All

One thought on “When Will Jerry Learn?”