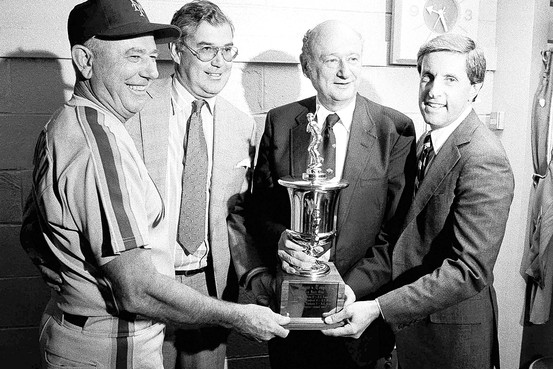 As we stand at the midpoint of the Subway Series, I figured it would be a good time to take a look back at the old Mayor’s Trophy Game, now a New York baseball relic.

For those too young to remember, first of all, I hate you all. Second, from 1963-1983, with a break in 1980 and 1981, the Mets and Yankees would play in an exhibition game in the middle of the season. Proceeds would benefit the city’s Amateur Baseball Federation and the winner would literally get a trophy from the mayor.

Before the Mets came into existence, the Yankees would play the Dodgers or Giants.

As they almost always are, the Yankees were better than the Mets in the series, winning 10 games to the Mets 8, with one tie. But the Mayor’s Trophy Game that I attended was a big Mets win.

It was May 27, 1982 at Yankee Stadium. The Mets were at their depths as a franchise — they hadn’t had a winning season since 1976 and were on their way to another last place finish. The Yankees, on the other hand, had played in four World Series since 1976, winning two and losing two. Even though the Yankees were slumping in 1982, this was still a David vs. Goliath scenario.

And somehow David won. The Mets pulled off an improbable 4-1 victory. The game drew 41,614 people, the best crowd the Yankees had at that point in the season.

I honestly do not remember anything about the game itself, but I vividly remember walking out of the stadium. Just like Shea, Yankee Stadium had exit ramps. But unlike Shea’s open and airy ramps, Yankee Stadium’s ramps were narrow, dark and dank. They were packed that night, and as we inched our way out, rowdy Mets fans were screaming “Let’s Go Mets” and Yankees fans were yelling back. They were banging on the walls. Quite frankly, it was kind of scary for a skinny teenager from Brooklyn. And don’t forget what The Bronx was like back then. That is probably why it is my only memory of that night.

Yet somehow we escaped unharmed and were able to revel in a huge Mets victory, even if it was in a meaningless exhibition game. Just like today, any victory over the Yankees is a good thing.

Mets at All Star Break

What the Mets Need