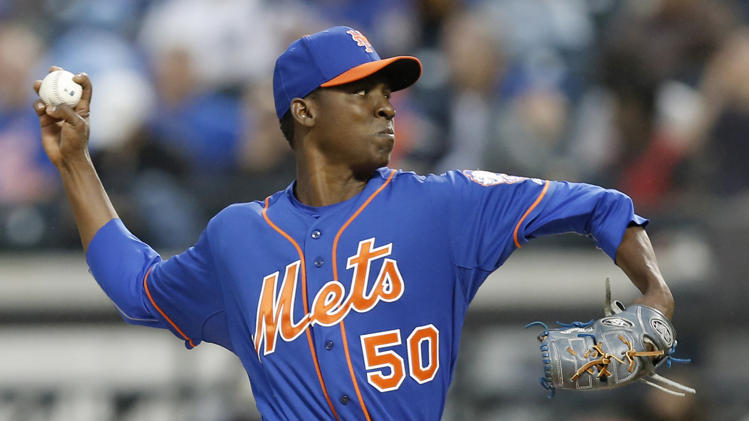 Rafael Montero made his major league debut as the Subway Series shifted to Citi Field Wednesday night. He was good, but Masahiro Tanaka was exceptional. He pitched a complete game shutout as the Mets remembered that they don’t know how to hit.

Montero allowed a single to the first batter he faced, Brett Gardner. He was able to get the next three outs.

With two outs in the second Montero walked Yangervis Solarte. Brian Roberts then hit a sinking liner to left. Eric Young dove for the ball and it got past him, all the way to the wall for a run-scoring triple and a 1-0 Yankees lead. It was a poor move by Young; he wasn’t even close to catching the ball and with Tanaka up next, Young basically gave the Yankees the run.

Rafael Montero got his first major league strikeout in the third when Derek Jeter whiffed. Not a bad guy for your first strikeout.

Solarte homered off of Montero with two outs in the fourth to give the Yankees a 2-0 lead. Roberts followed with another triple but Montero was able to strand him there.

In the first inning Murphy caught Tanaka napping on the mound and he swiped second. Chris Young tried the same thing after leading off the bottom of the fifth with a single, except Tanaka was awake this time and threw him out at second. Bad idea when you’re down by two runs.

Montero was at 97 pitches after five innings, but Terry Collins left him in there for the sixth, a bit of a surprise. Mark Teixeira led off the inning with a home run to make it 3-0.

Montero was done after six innings and 108 pitches. It was a reasonably successful debut, except for suffering the loss, of course — three runs allowed on five hits, three strikeouts and two walks.

Carlos Torres got the first two outs of the seventh but Gardner legged out an infield single.  He stole second and went to third on a wild pitch. Jeter then hit a little nubber a few feet in front of home plate. Torres got in the way of Anthony Recker fielding the ball and Recker’s throw was high to first. Gardner scored to make it 4-0.

After bashing the ball all over the place in the previous two games at Yankee Stadium, the Mets managed just four hits tonight.

Mets lose 4-0; their three game winning streak is over.