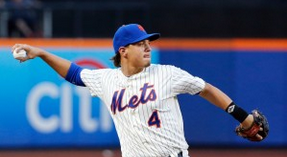 The Mets announced on Twitter Thursday afternoon that Wilmer Flores has been recalled from Las Vegas and will join the team in time for the game in Milwaukee. They said “a corresponding roster move will be made later.”

It is likely that Ruben Tejada will be placed on the seven-day concussion disabled list after getting hit in the helmet with a pitch on Wednesday. He apparently passed the tests and was allowed to fly to Milwaukee, but teams are being so careful that it would not be a surprise.

If Tejada does not go on the DL, it would also not be a surprise to see Bobby Abreu released. The Mets have one too many outfielders and obviously the 40-year-old Abreu has no future with the team.

Plus, he really is not hitting very well. He is batting .254 (albeit with a .351 on-base percentage) with one home run and 14 RBIs. He hasn’t driven in a run since July 5 and his lone home run came in April. Perhaps more importantly, as a pinch hitter he is batting a miserable .074. If the guy can’t hit coming off the bench, what use is he?

Whatever happens, Eric Campbell should not be going anywhere. The guy just continues to hit whenever he is in the lineup and has a future with the team as a super-sub or maybe even starting at first base or part of a platoon.

In any case, it will be good to see Wilmer Flores again. He has been red hot since being sent back down to Vegas. Hopefully he learned something out West, like Travis d’Arnaud apparently did, and can repeat his success at the big league level.

Kirk Nieuwenhuis was optioned to Las Vegas to make room for Flores. Nieuwenhuis hit .246 with two homers and 11 RBIs in 57 at bats with the Mets. He’s hitting .333 as a pinch hitter. At this point in their careers, I would much rather have Nieuwenhuis than Abreu. But what do I know?

Wilmer Flores Gets the Call

Kirk Nieuwenhuis Back with Mets

Mets Do Not Tender Wilmer Flores, But Tender d’Arnaud

One thought on “Wilmer Flores Recalled; Join Mets in Milwaukee”