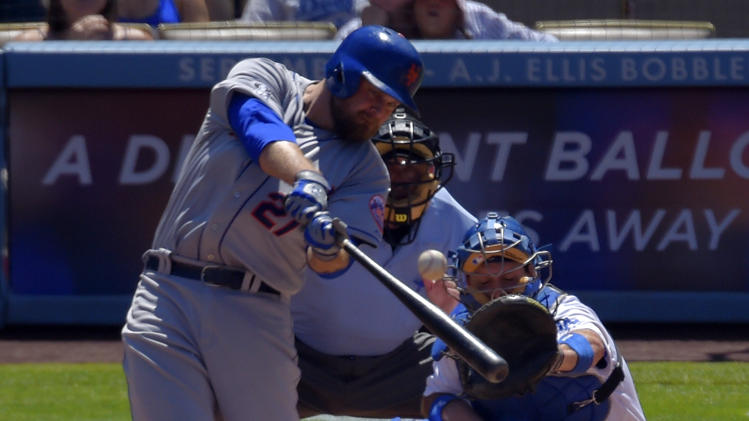 If only the Mets could play like this every game. They hit three home runs on Sunday and even turned a triple play as the Mets topped the Dodgers in sunny Los Angeles.

The Dodgers actually jumped out to an early lead, scoring a run in the first against Bartolo Colon. Colon flew back from the Dominican Republic following the death of his mother to start the game. He heads back for the funeral and is expected to make his next start on Saturday.

Travis d’Arnaud homered in the second to tie the score at one. With Juan Lagares on first, Eric Young hit a low liner that got past the second baseman and rolled all the way to the wall. The triple gave the Mets a 2-1 lead.

Daniel Murphy and David Wright both singled with one out in the third and then Lucas Duda hit an absolute bomb deep into the grandstand of beautiful Dodger Stadium to extend the lead to 5-1. With one on Ruben Tejada, yes Ruben Tejada! also homered to give the Mets a 7-1 lead.

Wright was removed from the game after the inning with muscle spasms in his neck.

Dee Gordon led off the sixth with a single. Yasiel Puig walked. Adrian Gonzalez singled to score Gordon to make it 7-2. With runners on first and second with no outs, Matt Kemp hit a tailor-made double play ball. The Mets got the forces at second and then first and then for some reason Puig tried to score. He was easily gunned down at the plate for the triple play.

The Mets continued the onslaught in the seventh. Pinch hitter Matt den Dekker, Curtis Granderson and Murphy each singled to produce a run. With one out Duda also singled to bring home another run to make it 9-2. d’Arnaud singled to load the bases. A sacrifice fly made it 10-2.

Colon went six innings, allowing two runs on five hits. He struck out five and walked one, pushing his record to 12-10.

The Dodgers added a run in the eighth and Duda hit his second homer of the day in the ninth, a solo shot. Duda now has 26 home runs, good for third in the National League. He had five RBIs and now has 76 for the season.

Murphy left the game in the middle of the ninth with a sore right calf.