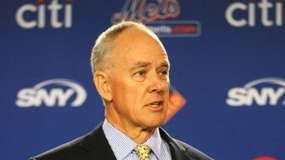 Having apparently seen enough of the big league team he has assembled, Sandy Alderson was in Binghamton Wednesday to watch the Double-A Mets open their playoff series (another thing he could not see in Flushing). He spoke with the local Press and Sun-Bulletin, giving them his usual double-talk nonsense. But he did say one thing that was quite telling.

When asked whether his off-season priorities will be adding a shortstop and another outfield bat, Alderson said this:

“Right now, part of what we need to do is assess what we have. If you look at shortstop, (Wilmer) Flores has actually done a very nice job for us at shortstop. (Matt) Reynolds has played well at short, both here and at Triple-A. Den Dekker had an excellent season at Triple-A. So we’ve got to assess what we have before we start going out and canvasing the free agent market. Free agents aren’t always the solution.”

Notice Alderson only said “free agents.” He did not say anything about trades. That should not come as a shock to anyone because Sandy Alderson will never be confused with “Trader” Jack McKeon. Alderson rarely makes deals with other teams. That is because making a trade takes risk; you have to hope and pray that the players you acquire perform better than the players you sent away. And if we’ve seen nothing from Alderson over the past four years it is that he is allergic to risk.

Since Alderson has taken the helm of the Mets on October 29, 2010, he has made exactly 12 trades. These are them (oh, and thanks to Ultimate Mets Database for the transaction history):

July 12, 2011
Francisco Rodriguez to the Milwaukee Brewers for Danny Herrera and Adrian Rosario.

December 18, 2012
Jefry Marte to the Oakland Athletics for Collin Cowgill.

June 18, 2013
Collin McHugh to the Colorado Rockies for Eric Young.

August 27, 2013
Marlon Byrd and John Buck to the Pittsburgh Pirates for Vic Black and Dilson Herrera.

April 18, 2014
Ike Davis to the Pittsburgh Pirates for Zach Thornton and Blake Taylor.

Only seven of the 12 trades actually made any impact on the team: The K-Rod, Beltran, Pagan, Dickey, McHugh (because he got Eric Young in return), Byrd/Buck and Davis deals.

Almost all of those trades had minimal risk. K-Rod, Beltran, Byrd and Buck were going to be free agents and were not going to be re-signed. Pagan wore out his welcome in New York. McHugh (part of the great Collin purge of June 2013) was designated for assignment before the deal (as was Young by the Rockies). The Davis trade came after months of excruciating hand wringing over whether he or Duda should be the starting first baseman.

Only the Dickey trade was risky. Remember, Dickey was signed for 2013 at a reasonable $5.25 million, so he did not have to be moved. It was only after the Mets and Dickey could not work out an extension that Alderson was prompted to trade him.

The point is Sandy Alderson is very cautious and seems afraid of making a wrong decision. That’s why it is easier to sign free agents. If you make a mistake, you are only losing money (although that is obviously a big deal with the Wilpons); you do not have to give up any players.

It is safe to assume Alderson has no desire to deal his surplus of pitching, except for Bartolo Colon, which would be another no-risk move. It is unlikely he would even move Daniel Murphy for fear of him winning the batting title in 2015 with another team, unless it is clear Murphy cannot be signed long-term. He probably will not repeat the Jose Reyes mistake, although you never know with Alderson.

So get ready for another winter of discontent, Mets fans, as Sandy Alderson is content to refuse to play Let’s Make a Deal.

In Praise of Sandy Alderson, to a Point

Sandy Alderson Actually “Went for it” in 2014

3 thoughts on “Sandy Alderson Suggests Trades Not Way to Go”