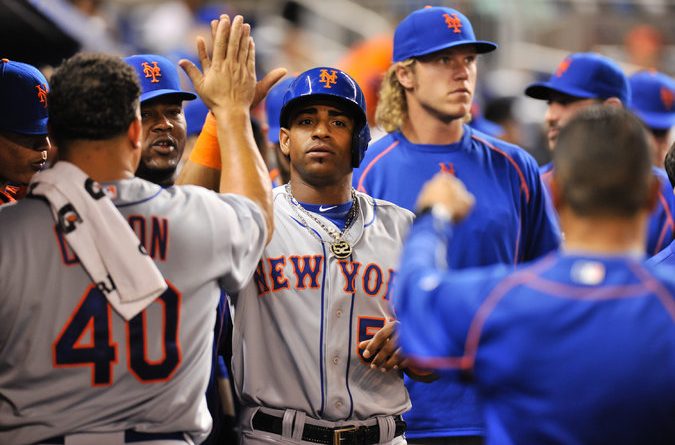 Yoenis Cespedes said on Tuesday that he would “love” to remain a Met after this season, but a quirk in his contract makes that highly unlikely. Sorry to put a damper on things, guys.

We all knew Cespedes’s contract calls for him to be released after this season, with his team not allowed to make him a qualifying offer so it would not get a draft choice (which is why the Tigers were desperate to deal him for something).

However, many of us did not know (until Adam Rubin at ESPN New York pointed it out) that under baseball’s rules, any player released after August 31 cannot sign a contract with that team until May 15 of the following season. This means for the Mets to re-sign him, they would have to reach a deal before he is released, which is before the free agency period begins in the off-season.

Here’s why this is unlikely. First of all, we have the Wilpons’s financial situation and their unwillingness to spend big money (Cespedes is likely due for a $20 million per year salary, at least). Then we have Sandy Alderson, who likes to let others dictate the market. Would he dare to sign Cespedes without knowing what other people would be willing to pay?

Then there is Cespedes himself. Would he sign with the Mets when he is so close to free agency and an unknown massive payday? Probably not. But then again, Cespedes is saying all the right things.

“This is something I can’t control,” Cespedes said through an interpreter. “I don’t know what the front office is thinking about. But with what I see so far, I would love for everything to work out and stay as a Met for a long, long time, because I like the atmosphere.”

He also likes what he sees of the team.

“The first thing you can see is the pitching,” Cespedes said. “Every team needs pitching, and I think we have enough pitching to go all the way to the finals. Other teams that I’ve been around, they scored four and they give up four. This team, if we score four with the pitching that we have, we’ll be able to compete and go to the finals. The energy that everybody feels from the pitching staff and the hitters is a plus.”

Of course, we all thought the Mets could not re-sign Mike Piazza, but he agreed to a contract before free agency began. So maybe history will repeat itself with Yoenis Cespedes. If not, we should just enjoy him for the next two months — and hopefully three.

3rd Place or Bust for Mets