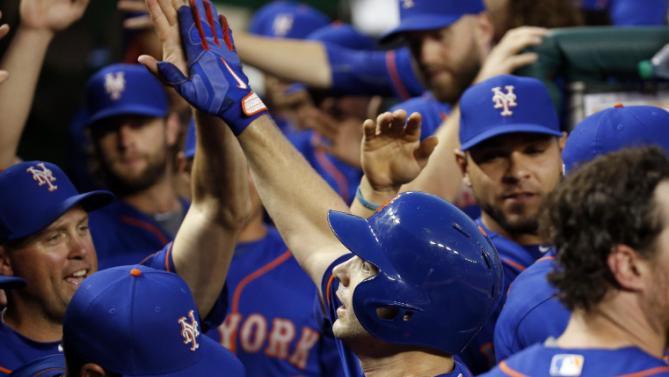 Do the Nationals even want to win the division? After taking a commanding lead Tuesday night against the Mets, Washington gave it away, and then the unlikeliest of heroes gave the Mets the win.

The Nationals jumped out to a 2-0 lead in the first inning off of Matt Harvey, but the Mets got a run back in the second when David Wright hit a long home run into the seats in left to make it 2-1. The Nationals made it 3-1 in the bottom of the second. And then the fun began.

A single and walk put runners on first and second with no outs in the bottom of the sixth for the Nats. Ian Desmond bunted back to Harvey. He fumbled the ball but still tried to go to third, but the throw was late. One out later, Michael Taylor singled to center. Yoenis Cespedes charged the ball and it skipped over his glove. It went all the way to the wall and everyone scored, including Taylor. He was credited with a single and one RBI and Cespedes had committed a huge error to give the Nationals a 7-1 lead.

But these Mets do not give up.Wright led off the top of the seventh with a single. With two outs Michael Conforto walked. Wilmer Flores singled to score Wright to make it 7-2. Juan Uribe walked to load the bases. Then Curtis Granderson walked to force in a run, 7-3. Cespedes then doubled to clear the bases, making up for his gaffe, cutting the Nats lead to 7-6. Then Daniel Murphy walked and Wright walked to bring in the tying run. An incredible six walks in the inning.

Kirk Nieuwenhuis, that unlikely hero, hit a pinch hit home run in the eighth to give the Mets an 8-7 lead.

Tyler Clippard shut down the Nationals in the eighth. Jeurys Familia came on in the ninth and allowed a leadoff single. Matt Williams had Anthony Rendon, who had zero sacrifices all season, bunting. Even on a 3-1 count, he had the bunt on. He bunted hard to Lucas Duda, who fired to second for the first out. Thanks Matt Williams (Mets fans should also thank Williams for taking a dominant Jordan Zimmerman out of the game with two outs in the fifth because he reached exactly 100 pitches. And we thought Terry Collins was a bad strategist!). Familia walked Bryce Harper to move the tying run to second. Yunel Escobar grounded into a game-ending double play.

The Mets win a huge one 8-7. Their second straight comeback in Washington extends their lead in the NL East to six games.

Mets Give Away Game to Nationals in 12