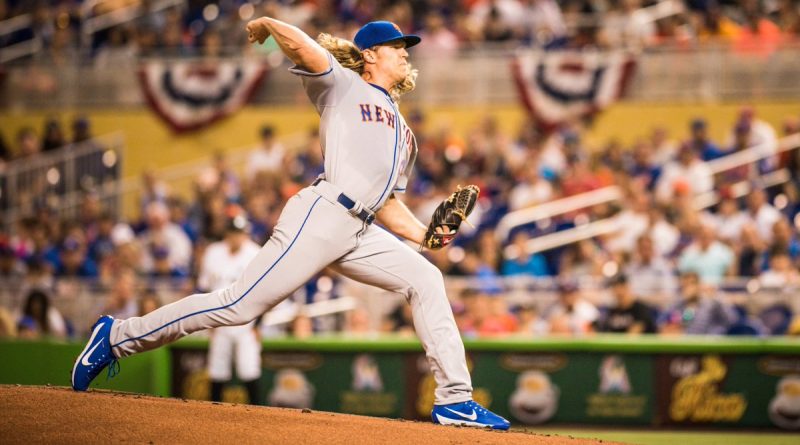 Noah Syndergaard once again had to leave a game early Friday night, and the Mets blew several scoring opportunities early as they lost in the bottom of the ninth inning

Dee Gordon led off the game for the Marlins with a single. J.T. Realmuto hit a grounder to Asdrubal Cabrera, but he threw wide of second, the error putting runners on first and third. Gordon scored on a sacrifice fly to give the Marlins the early lead.

The Mets first missed opportunity was in the second inning. Edinson Volquez, who only got the start because the Marlins used their scheduled starter in the 16th inning of Thursday night’s marathon, walked two batters with two outs to load the bases. Unable to find the plate, Rene Rivera helped Volquez out by flying out to end the inning.

Two more walks and a single loaded the bases again in the third, this time with one out. Michael Conforto hit a sacrifice fly to tie the game at one. But that was all the Mets could muster.

Lucas Duda broke the tie with a long solo home run to center field to make it a 2-1 game.

The Mets blew another chance in the sixth. Jose Reyes led off with a walk and went all the way to third on a sacrifice bunt. But he was stranded there to keep the game tied at two.

Noah Syndergaard, who did not have his best stuff, went six innings, leaving with two torn fingernails. He allowed two runs (one earned) on six hits. he struck out four Marlins and did not walk anyone. In fact, he has not walked a batter in his three starts this season.

So it was left to the Mets exhausted bullpen. Rafael Montero got the seventh. Two singles and an intentional walk loaded the bases with one out. Jerry Blevins came on to face the lefty Christian Yelich. He lined out to Michael Conforto in left, getting the start for a flu-ravaged Yoenis Cespedes. The runner on third tried to tag up, but Conforto unleashed a perfect strike on the fly to Rivera to end the inning. Don Mattingly challenged, saying the runner got his hand in before Rivera tagged him, but the call was upheld and the game remained tied.

With one out and Jose Reyes on first in the eighth, Cespedes came up to pinch hit. He struck out. Rivera singled to move Reyes to second, but Curtis Granderson flied out.

After a scoreless eighth, Josh Edgin was back on the mound for the ninth. He walked the leadoff batter and got the next two outs. But he could not get the final out; Realmuto hit a ball to the wall to score the winning run.