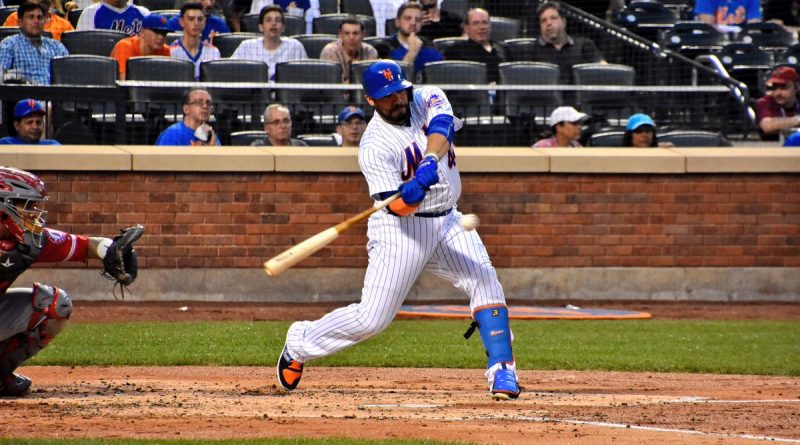 The Mets losing streak came to a halt Friday night, as they beat the Angels at Citi Field.

The Mets got on the board in the first, thanks to some shoddy fielding by the Angels. Michael Conforto led off with a liner to left. Cameron Maybin misplayed it into a single. Jose Reyes then bunted, and first baseman C.J. Cron could not find the bag with his foot. The error put runners on first and second with no outs. With two outs Curtis Granderson slashed a ground rule double down the line in left to plate Conforto.

Rene Rivera made it 2-0 with a run-scoring single in the sixth, extending his hitting streak to 11 games.

Meantime, Jacob deGrom was cruising along until the seventh, when he developed a problem with a finger. A double, walk and hit-by-pitch loaded the bases with no outs. deGrom was able to strike out Danny Espinosa for the first out. The next batter hit a little flair behind second base. Reyes raced out and got a glove on the ball, then was able to snag the ball after it bounced off. deGrom got the third out on a fly ball to right. By the way, Albert Pujols, out with a nagging hamstring, sat in the dugout all inning and did not pinch hit.

deGrom was done after the inning, allowing four hits with nine strikeouts and three walks in seven shutout innings.

Conforto led off the bottom of the seventh with a home run to give the Mets a 3-0 lead.

Jerry Blevins and Paul Sewald combined for a scoreless eighth. Addison read came on in the ninth for the save attempt. He retired the Angels in order to nail down the win.

Mets Drop Another One; Losing Streak at 6