Mets favorite Rusty Staub is on the Hall of Fame ballot that used to be called the “Veterans Committee,” but now has the unfortunate name “Expansion Era ballot for the Committee to Consider Managers, Umpires, Executives and Long-Retired Players for Hall of Fame.”

After the old Veterans Committee was revamped a few years ago, the new Committee consisting of every living Hall of Famer failed to elect anyone, so this year it was revamped again. Here’s how it works –this year the Committee will consider players and executives from the Expansion Era (1973-present),  next year will be the Golden Era (1947-1972), and 2012 will be Pre-Integration (1871-1946).  Then the cycle starts all over again. 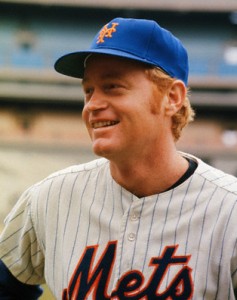 Although every Mets fan would love to see Staub elected, it’s just not going to happen. Staub had a fine career — 2716 hits, a .279 batting average, 292 homers and 1466 RBIs. It’s just not Hall of Fame worthy. If you want to make an argument for Staub, you could say he actually had very similar numbers to HOFer Tony Perez. They had the same career batting average and virtually the same number of hits. Of course, Perez had 379 homers and 1652 RBIs. But with that power came strikeouts — 1867, compared with Staub’s paltry 888. Still, Staub is not likely to get in.

Tommy John won 288 games and has a surgery named after him, but he was never a truly dominant pitcher.

Of all of these players, the only one who ever felt like a Hall of Famer to me was Steve Garvey. Ask anyone who watched him in the 70s, and they’ll tell you they were watching a future Hall of Famer. He was a ten-time All Star and an MVP winner. Yet his final numbers were surprisingly pedestrian — 272 home runs, 1308 RBIs, .294 with 2599 hits. It’s unlikely he’ll get in.

I think the executives have a better chance than the players. Marvin Miller just missed induction last time, and I think he’ll get in this time around. Pat Gillick has built several winners. And for all of his negatives, George Steinbrenner was a revolutionary owner who won seven World Series championships during his reign. He’ll get in for sure when the results are announced on December 6th.

Incidentally, the one retired player who is off the regular ballot who is most deserving of induction just missed being on the ballot by a year. The only players eligible for this ballot are those whose last seasons were 1989 or earlier. This particular player retired after the 1990 season. I will write more about why he deserves to be in the Hall of Fame in a future post. His name — Keith Hernandez.

My IBWAA Hall of Fame Ballot

Just Get Rid of Hall of Fame Veterans Committee?

2 thoughts on “Rusty Staub on Hall of Fame Ballot”