If this season’s rash of injuries on the Mets seems familiar, it’s because it has happened before, and pretty recently, too. In 2009 much of the Mets called the disabled list home at one time or another. But which season was worse? Let’s take a look at the key injuries on both teams: 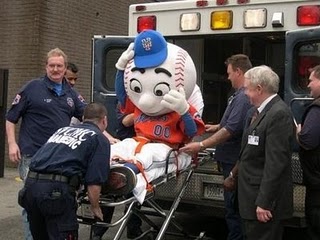 That’s a lot of injuries. Even though it appears there were more injuries in 2011, I would have to say that 2009 seemed far worse, probably because of the length of the DL stays. Reyes and Delgado were pretty much lost for the whole season and  Beltran missed half the season right there in the middle, so it felt like they were all gone for the entire season. The pitching loses didn’t seem that bad — Santana went down when the Mets were out of it, and the other three were useless anyway.

In 2011 the injuries were more staggered. Yes, Davis and Wright went down at the same time, but they waiting until Bay came back. And Reyes waited to get hurt until Wright was back. As far as pitching, again it didn’t feel so bad. Getting Santana back would have been nice, but it was all a pipe dream. Young was an injury waiting to happen. Overall the Mets starting staff stayed in there the entire season.

Perhaps 2009 seemed worse because the Mets had huge expectations that year. They were opening a new stadium and Sports Illustrated picked them to win the World Series. There were no expectation in 2011 — the Mets were supposed to be mediocre, injuries or not, and they didn’t disappoint.

Mets Fans Have Plenty for Which to be Thankful

What the Mets Need