Mike Puma of the New York Post (via Mets Blog) has an intriguing idea — release Mike Pelfrey right now. He writes on something called Sulia.com: 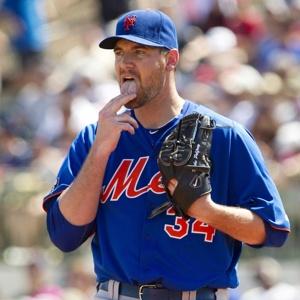 Asked a Mets official about the possbility of the team dumping Mike Pelfrey, who has a non-guaranteed contract and would be owed only a fraction of $5.68 million if cut in camp. It doesn’t seem there have been discussions about dumping him, but just say the team is also well aware of the fact he’s got a non-guaranteed deal.

I didn’t realized this was even a possibility, but now that I know, I will lie awake in bed every night praying that the Mets do it. Pelfrey never should have never tendered in the first place and his spring performance thus far (9.2 innings, 18 runs, 20 hits) proves it.

The only problem is that the Mets made their off-season plans with Pelfrey included, and just like the rest of the team, there is very little depth in the starting rotation (great job, Sandy). But there is a way.

With all of the off days early in April, the Mets probably won’t need a fifth starter anyway for a couple of weeks. They can leave Miguel Batista on the roster just in case another starter is needed.

In the meantime, Matt Harvey makes a few starts in the minors. If he does well, they can bring him up and insert him in the rotation by the end of April. If he is struggling, use Batista. Or Chris Schwinden. Or sign Roy Oswalt. Or see if Jerry Koosman is still in shape. Anyone but Pelfrey.

There are no negatives here. It rids the Mets of Pelfrey’s struggles and could jump-start the career of a highly touted prospect.