There was a lot of Mets news Tuesday, so let’s get right to it. First off, apparently you really can leave your heart in San Francisco (left, the classic photo). That’s where Begnie Molina’s was. The catcher who was said to be destined for Queens spurned the Mets, and resigned with the Giants. The deal is reported to be one year, $4.5 million. By all accounts the Mets offered one year upwards of $6 million, with an option for year two. Molina was holding out for a guaranteed second year, and when the Mets wouldn’t bite, he hopped the next trolley for San Francisco.

I say good riddance. Obviously he didn’t want to play for the Mets, and was just coming here for the money. Who needs that? Besides, Molina is not a game changer. He’s really no great loss.

What I think the Mets should do is go with Henry Blanco and Omir Santos, and put that $6 million towards someone else. There are many options here. Since they were going to spend the money anyway, why not spend it on the long-coveted Orlando Hudson? He would add a much needed spark to the lineup, as well as to the clubhouse. That would leave Luis Castillo a $6 million benchwarmer. Better to have $6 million on the bench with Hudson and Blanco or Santos in the lineup, than with Castillo and Molina on the field. Or the Mets could sign two, maybe three more pitchers. Which leads us to our next news item: Ben Sheets (left) throws for scouts in Louisiana. The Mets were among more than a half a dozen teams who attended the audition. Several scouts said they were looking at “the old Ben Sheets.” That would be “the old Ben Sheets” who was 25-14 in 2007 and 2008 before missing all of last season following elbow surgery.

Sheets is said to be seeking $12 million dollars for 2010. That’s entirely too much for a pitcher who missed a season with injury. Several “experts” predict he’ll eventually get the same contract Brad Penny got from the Cardinals — $7.5 million. At that price, I would give Sheets a shot. If he’s healthy, and that’s a pretty big “if,” Sheets is an ace who would fit in very nicely behind Johan Santana in the Mets starting rotation.

I’ve been saying all winter that the Mets should sign two starters. I like Jon Garland, a workhorse who always manages a winning record. But reports say the Mets are seriously considering Joel Piniero. Many fear he could be a one-year, Dave Duncan wonder. And he reportedly wants a three-year deal. I wouldn’t take a chance. A rotation headed by Santana, a healthy Sheets, and Garland, followed by the two best of Mike Pelfrey, John Maine, Jon Niese or Oliver Perez would be pretty formidable.

Now that Molina isn’t coming, if the Mets sit pat with their catchers, they could use the money to sign a third pitcher. John Smoltz’s name has been bandied about. He could start or be the eighth inning bridge to Francisco Rodriguez. I’m not too excited about signing a pitcher who’ll turn 43 during the season, and who spent most of his career with the Braves, but if he comes cheap, it could be worth a shot.

Now onto Jason Bay and his knees. A report in the New York Post says the Red Sox backed away from resigning Bay last July because of a disagreement over the diagnosis of Bay’s knees. The first thing to know is that the information comes from Peter Gammons, so there’s a very good chance, like virtually everything he writes, that it’s absolutely false. However, it concerns Gammons’ beloved Red Sox, a team he reports on breathlessly. The Sox could have indeed leaked him the information, but because it came from the beloved Sox, he never tried to confirm it independently.

Anyway, Gammons said on NESN, “The MRI showed some problems with both knees. Ownership wanted (to give him) two years and he had to prove that he was healthy to be able to make it four years, and he wouldn’t sign.”

The Mets countered, a spokesman telling the Post,  “(Bay) had a physical and everything is fine.” Given the Mets medical history, it remains to be seen, but I can’t imagine they would have given him a big money, four-year deal if an MRI turned up knee trouble. But Gammons said the Red Sox doctors are “probably the best in any sport.” Of course he said that. 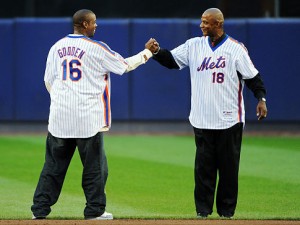 Now some good news. The Mets announced they will induct Darryl Strawberry, Dwight Gooden, Davey Johnson and Frank Cashen into the team’s Hall of Fame. It seems like the Mets are listening to their fans who want the team history acknowledged in a bigger way at Citi Field. The actual Hall of Fame is being built and will open during the season.

Maybe now they will retire a few more numbers. Keith Hernandez’s 17 definitely should. And so should Mike Piazza’s 31. I read somewhere that the Mets want to wait to retire Piazza’s number until they see what cap he wears when he enters the Hall of Fame. It said the Mets would be embarassed if they retired his number, then he wore a Dodgers hat on his Hall of Fame plaque. What would be embarassing about that? The Mets would be honoring him for his great years in Flushing, and the Hall would be honoring his entire career, half of which was spent in Los Angeles. The Cubs retired Greg Maddux’s number last year, the season after he retired, and it’s almost certain he will go into the Hall of Fame as a Brave. Why should the Mets wait on Piazza?

Mets Should Not Re-Sign Daniel Murphy