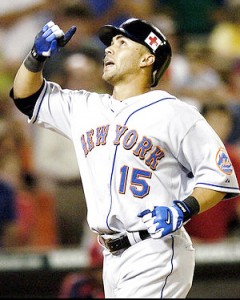 It’s taken around two months longer than expected, but Carlos Beltran is on the way back. Omar Minaya announced on Tuesday that Beltran will begin his minor league rehab assignment Thursday in Port St. Lucie. The team has 20 days from the beginning of the assignment to activate Beltran. That would put his return to the big leagues at around the All-Star break.

Once he comes back, what will become of Angel Pagan? Pagan has done more than just an admirable job filling in for Beltran. He is the Mets leading hitter with a .304 average after Tuesday night’s four-hit game. He is tied with Jose Reyes for the team lead in triples with five, and is second in stolen bases with 14. And perhaps most surprisingly, Pagan is third on the team with 35 RBIs — six more than the high priced Jason Bay, and just as many homers as Bay (four).

Of course, Bay isn’t going anywhere, nor should he. And despite his ups and downs this season, Jeff Francoeur is second on the team in RBIs with 38 and is playing his usual solid defense in right field. He’s done nothing to warrant a demotion.

My guess is Pagan will get a couple of starts a week, giving Beltran’s creaky knees a rest, as well as an occasional day off for Bay and Francoeur. But if Francoeur goes into one of those deep, deep slumps, Jerry Manuel might be tempted to insert Pagan on a more regular basis. All in all, it’s not a bad problem to have.

It was nice to see Bobby Parnell back on the Citi Field mound Tuesday, where he should have been all along. I never did quite understand why he started the year in the minors. He did well last season, and deserved to make the club out of spring training. I can only assume he shared my puzzlement as such luminaries as Manny Acosta, Raul Valdes, and Tobi Stoner got the call instead of him. But now Parnell is back, and hopefully he’s here to stay. Now if we can just get Pat Misch onto the team in place of the increasingly unreliable Valdes, the pitching staff would be complete.

Meantime, the Mets continue to roll. After a successful 7-2 road trip, the Mets returned to Citi Field and blasted the Tigers 14-6. They are now ten games above .500, in second place a game and a half behind the Braves. The offense was firing on all cylinders. Now imagine Beltran hitting like his old self in the middle of that lineup, and that’s quite a powerhouse. Add a Cliff Lee or Roy Oswalt to the rotation, and well, dare I say, that would be a team that would be hard to beat.

Beltran to Right; Valentine to Own?

One thought on “Carlos Beltran on Road Back”