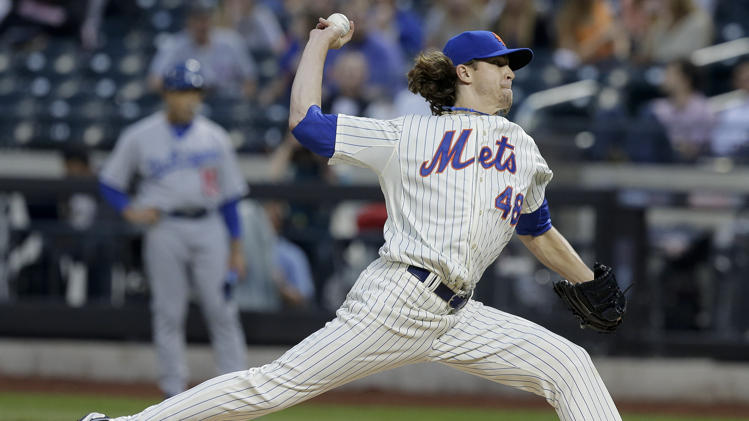 Jacob deGrom started the second game of his career Wednesday night against the Dodgers. Except for three pitches, he did well. Still, the Mets lost their second straight to Los Angeles.

When you allow just four hits in six innings like deGrom did, you often times walk away with a win. But not when three of them are home runs. DeGrom allowed solo shots to Adrian Gonzalez in the second and back-to-back bombs to Yasiel Puig and Hanley Ramirez in the sixth as the Dodgers built a 3-0 lead.

Eric Campbell got two of the runs back with a home run of his own in the bottom of the sixth. The first homer of his career was a two-run job that cut the Dodgers lead to 3-2.

With Daniel Murphy on first with two outs in the seventh, David Wright hit a sinking liner to right. Puig dove and he just missed it. Luckily for the Dodgers it ticked his glove and didn’t get too far past him, keeping Murphy from tying the score. With runners on second and third Chris Young grounded out to end the threat.

The Dodgers picked up a huge insurance run in the eighth. Chone Figgins led off the inning with a double and was sacrificed to third. Puig walked and Ramirez hit a hard comebacker for a likely inning-ending double play. But both Murphy and Wilmer Flores converged on second. Jeurys Familia hesitated, not knowing to whom to throw. By the time he finally threw and got the force at second, it was too late to throw to first. Figgins scored to extend the lead to 4-2.

Juan Lagares tripled with one out in the ninth, his third hit of the night. Murphy hit a grounder to deep second. He was thrown out but Lagares scored to make it 4-3. Wright, who also had three hits, struck out to end the game.

The Mets collected 13 hits to the Dodgers five, but they still lost 4-3.