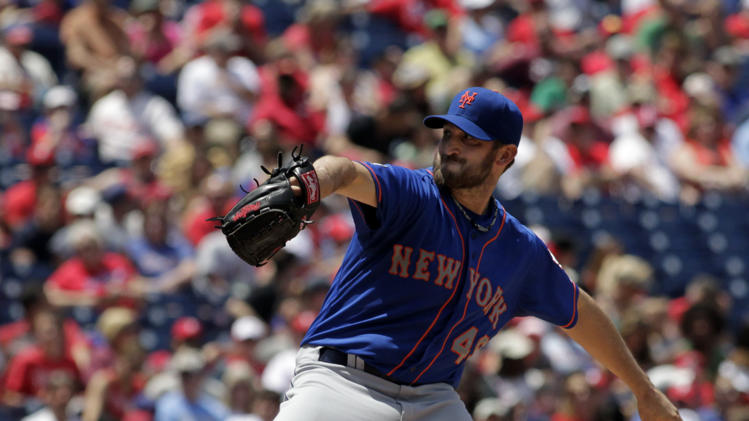 After two 14 inning games, the Mets need a long, quality start from Jonathon Niese on Sunday. They got it, but in the end a dumb play by his own teammate knocked him out of the game after eight innings. But it was not enough for the Mets and Phillies to avoid extra innings for a third straight game. The Mets won in a relatively short 11 innings.

The Mets got on the board in the fourth. David Wright led off with a double and went to third on an Eric Campbell infield single. Chris Young fouled out to shallow left, but with the infielder’s momentum going backwards to make the catch, Wright was able to tag up to score the game’s first run.

The Phillies took the lead in the bottom of the fourth on one swing of the bat from Ryan Howard — a two-run shot to center field made it a 2-1 game.

Campbell led off the sixth with a double. Chris Young hit a routine grounder to short, but Jimmy Rollins threw it away. Young went to third and scored on a Curtis Granderson sacrifice fly to tie the game at two.

The Phillies ran themselves out of possibly taking the lead in the seventh. With one out and a runner on second, Domonic Brown singled to left. The throw came home, so Brown broke for second. He was a dead duck and was tagged out in a brief rundown for the second out. Niese was able to retire Ben Revere on a comebacker to end the inning.

With Niese hitting for himself with two outs in the eighth and Ruben Tejada on first, Tejada stupidly tried to steal second. He was thrown out, which meant Niese had to lead off the ninth. Because of that, Terry Collins chose to pinch hit Bobby Abreu for Niese. Niese had only thrown 91 pitches and could have gone further. Smart man, that Ruben Tejada. The Mets of course failed to score in the inning.

So Niese ended up going eight innings, allowing two runs on eight hits. He struck out six batters and walked one.

Scott Rice came on for the ninth to face one batter. That would be Ryan Howard, you know, the guy who hit homers in the past two games. He got him to ground out. Vic Black was next. He got the next two outs and once again the Mets and Phillies were headed to extras.

With a man on in the 11th Lucas Duda hit a two-run bomb to center to give the Mets a 4-2 lead.

Jenrry Mejia allowed a home run to Marlon Byrd to make it a 4-3 game. With two outs he faced Howard. He grounded out to end the game.

Mets Lose Long One to Phillies in 11

One thought on “Mets Win; Extras Again with Phillies”