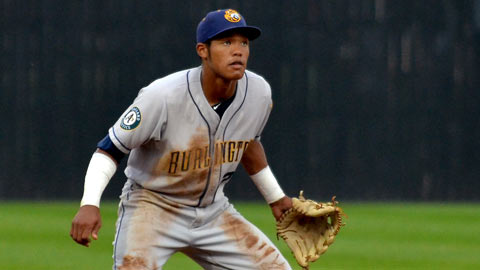 Multiple reports say the Mets are willing to send prized prospect Noah Syndergaard to the Cubs in order to land the equally coveted shortstop prospect Addison Russell. If this is true, it raises the question of whether the Mets could have swung a trade with the A’s to get Russell instead of the Cubs, and without giving up the jewel of their organization.

At the beginning of July the A’s sent Russell, 2013 first round pick Billy McKinley, pitcher Dan Straily and a player to be named later to Chicago for starters Jeff Samardzija and Jason Hammel. While McKinley and Straily have promise, Addison Russell was the big sacrifice for the A’s, who are in win-now mode and wanted to add to quality starters to the rotation.

So the pitchers the A’s got are perfectly serviceable, but really, nothing to write home about. As far as their age and how long the A’s can control them, Samardzija is 29 and has one more year of arbitration left while Hammel is 31 and will be a free agent after the season. Samardzija is making $5.345 million this season while Hammel makes $6 million.

Since it is clear the A’s wanted two veteran pitchers who could step right into the rotation, could the Mets have made the same deal for Jonathon Niese and Dillon Gee? Niese makes just over $5 million this season and is signed for two more years at reasonable salaries of $7.05 million and $9.05 million, respectively. Gee makes $3.625 million and has two years of arbitration left. So both are controllable longer and are younger; Niese is 27; Gee is 28.

Of course, it cannot be omitted that at the time of the trade, Gee was just about to come off the disabled list and Niese was just about to go on it. They are both pitching now, but their health would certainly have been a concern for the A’s. But as far as performance, Niese and Gee match up reasonably well with the pitchers the A’s got.

Perhaps a bigger question is this — would the Mets have made this deal? It is always a risk to send two-fifths of your rotation away, especially for someone unproven. But the Mets have so much young pitching it might have been worth the gamble. However, Sandy Alderson has shown time and time again that he is not a gambling man, unlike Theo Epstein, who rolled a similar set of dice on this trade for the Cubs.

Really, it boils down to this — if the Mets do end up trading Syndergaard for Russell, whom would you rather have on your team; Russell, Niese and Gee or Russell and Syndergaard?

I don’t know about you, but I would be very comfortable going into 2015 with a rotation of Matt Harvey, Zack Wheeler, Jacob deGrom, Rafael Montero and Noah Syndergaard (and maybe with a couple of Dice-K type veterans stashed in the bullpen or the minors just in case). With Addison Russell at short and a slugging left fielder acquired with the money saved from dealing Niese, Gee and Bartolo Colon, you’ve got yourself a ballclub.