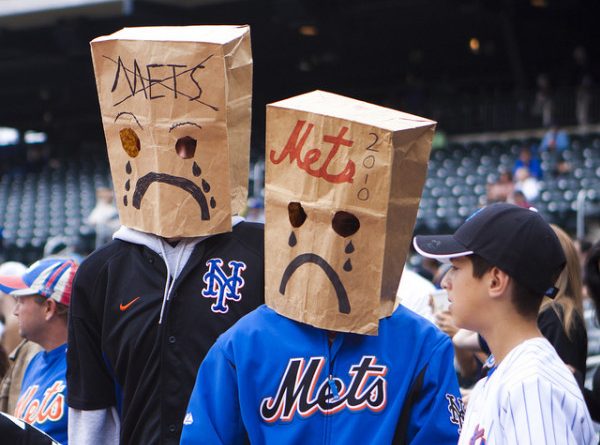 This crucial juncture in the Mets season reminds me of the “Seinfeld” episode where George fears the loss of Independent George. He says to Jerry, “It’s all just slipping away. And you’re letting it happen.” In this case, “it” is the Mets season and “you” is Sandy Alderson. Oh, and it’s not very fun to watch.

The Mets are riding a seven-game losing streak and are below .500 for the first time since the first week of the season. With the lack and hitting and no help on the way (save for Daniel Murphy’s return from the DL), there is no evidence that things will turn around. And Alderson is just watching while it all slips away.

But really, what could Alderson actually do? He is refusing to deal any of the young stud starting pitchers, which is smart. But that means he will not be able to acquire a difference maker.

The main problem is that Alderson locked himself into a poor lineup. There is nothing he can do with the underperforming Curtis Granderson and Michael Cuddyer except bench them and admit his budget-busting mistake. That is not about to happen. Moving Wilmer Flores to second and Ruben Tejada to short when Murphy comes back makes the defense stronger. But no team is winning anything with Tejada as a starting player.

Alderson could have addressed the team’s deficiencies in the off-season, but all he did was sign Cuddyer. He thought it would be enough. And maybe it would have been if nobody got injured and if everybody played up to their potential.

That is a lot of ifs. Alderson was basically banking on perfect seasons from everyone. He should know that rarely happens. Even if Terry Collins eventually pays the price for this sinking season (and sooner rather than later despite reports), do not be fooled — this is Sandy Alderson’s mess. He is to blame. No one else. And there’s nothing he can do about it now except let it happen.

Reports: Lucas Duda to be Starting 1B

No Winter Fun for Mets Fans

One thought on “It’s All Just Slipping Away…”