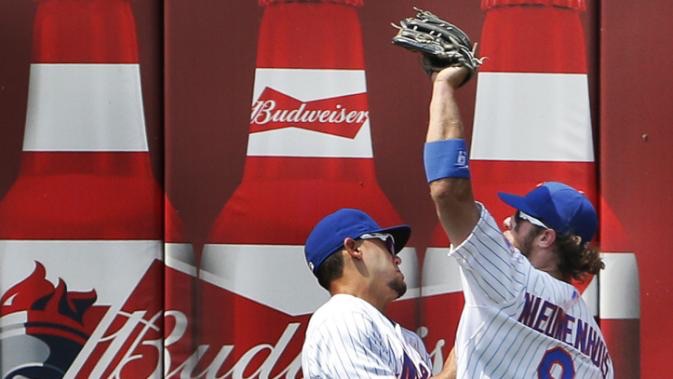 Jeurys Familia blew Sunday’s game against the Dodgers in the ninth inning, spoiling a fine outing by Jacob deGrom. But then new Met Juan Uribe won the game for the Mets in the 10th.

Zack Greinke got his scoreless innings streak up to 45.2 when they Mets ended it in the third. deGrom grounded out to score Kirk Nieuwenhuis to make it 1-0.

The Mets extended the lead to 2-0 when Greinke hit Michael Conforto with a pitch to force in a run.

deGrom was removed from the game with two outs and one on in the eighth. Familia came on to get the last out.

deGrom was brilliant, allowing no runs on just two hits, with two walks and eighth strikeouts. He lowered his ERA to 2.05, second in the league behind Greinke.

But it went for naught. In the ninth Adrian Gonzalez and Justin Turner doubled, and Yasmani Grandal singled and the game was suddenly tied at two. It was Familia’s second blown save since the All-Star break.

So it went to extra innings. Jimmy Rollins led off the 10th with a walk against Jenrry Mejia. He stole second and was sacrificed to third. Mejia struck out Joc Pederson for the second out. Howie Kendrick flied out to end the inning.

Granderson led off the bottom of the inning by legging a single into a double. Ruben Tejada was called on to sacrifice for some reason. He popped it in the air, but Gonzalez could not catch it. However, Granderson was frozen at second and could not advance on the out. Daniel Murphy was intentionally walked. Juan Uribe then hit a drive off the wall in center to win the game.

Mets win 3-2 to gain a tie of the four-game series.