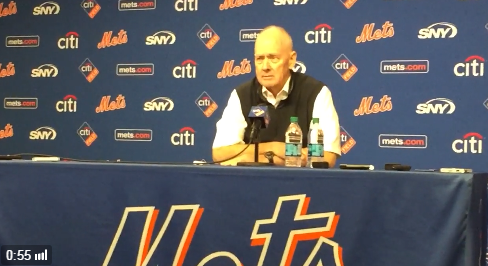 Sandy Alderson revealed Tuesday that he had cancer surgery last Wednesday and is on “a road to full recovery” from the disease.

“The surgery was preplanned,” Alderson said, according to ESPN New York. “It was part of an overall strategy that was devised by my doctors early in December. The surgery followed a very successful regime of chemotherapy. The surgery itself was, I’m going to say, fantastically successful. The doctors were able to do everything they had hoped to do and were able to avoid everything they hoped to avoid. So, from that standpoint, everything worked out extremely well.”

That Alderson waited a week to make this announcement should not be a surprise; everything about his diagnosis has been hush-hush, even the type of cancer he has.

“It’s not because I’m trying to be cute or evasive, but there’s a certain amount of information that is mine only,” Alderson said. “Rather than throwing everything out there and creating even more speculation — not in terms of me, but the speculation as it relates to the population, etc., etc., I just decided not to go there. By making myself visible, by talking about it to the extent that I have, my goal is to make sure that everybody is comfortable with where I am and what they believe is my physical situation. I feel an obligation to the Mets. And I feel an obligation to the fans. And if I didn’t feel that I could discharge that obligation, I’d follow a different course.

“Really the only reason for having to talk about this at this point is that there has been some speculation, and I wanted to make sure that was put to rest.”

As far as baseball, Sandy Alderson’s deputies have been handling some of his responsibilities, but Alderson is not all removed from the operation.

“I expect to be here some portion of virtually every day. I’m in daily contact with ownership as well as the baseball-operations department and anyone else who needs access to me, other than perhaps the media. So everything is going very well.”

Does Sandy Alderson Believe in His Own Team?

Sandy Alderson Hints Mets Career Could be Over

Evaluating All of Sandy Alderson Moves