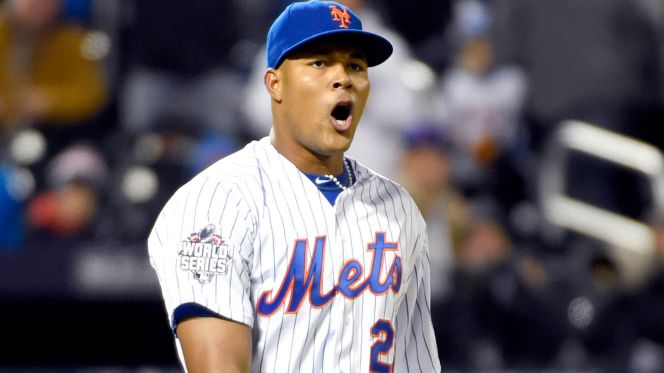 Following a day or so of intrigue, the Mets officially traded Jeurys Familia to the A’s Saturday afternoon. Thus begins the 2018 edition of the Great Mets Selloff.

In return for the closer, the Mets get two minor leaguers. They also get a million bucks of international bonus money and shock of shocks, the A’s are picking up the rest of the $3 million Familia is owed. This, after the Mets trio of GMs said they would be willing to eat salary to increase the quality of prospects. So Sandy Alderson was not the only liar in the front office.

Speaking of prospects, third baseman William Toffey and reliever Bobby Wahl now join the fine Mets organization. Toffey was a fourth-round pick by the A’s in 2017. His minor league stats so far (6 homers, 54 RBIs, .255 in 450 at bats over two seasons) are not particularly impressive, even though Mets GM #1 John Ricco calls him a “strong prospect.” Bobby Wahl was a fifth-round pick in 2013. The guy can strike out a batter (284 Ks in 216.1 minor league innings), but he pitched to a 4.70 ERA in a seven-game audition with the A’s last season. Ricco calls him “a major league ready reliever our scouts recommended.”

Jeurys Familia bids farewell after seven seasons in Flushing, setting a team record for saves with 51 in 2016. However, he will likely be remembered for blowing three saves in the 2015 World Series and allowing the go ahead home run in the 2016 Wild Card game.

So who’s next? Asdrubal Cabrera? Wilmer Flores? Zack Wheeler? Not Jacob deGrom or Noah Syndergaard. Whoever it is, expect similar deals for marginal prospects as the Mets reluctance to pay departed players will likely continue.

Jeurys Familia Has Surgery; Could Miss Rest of Season