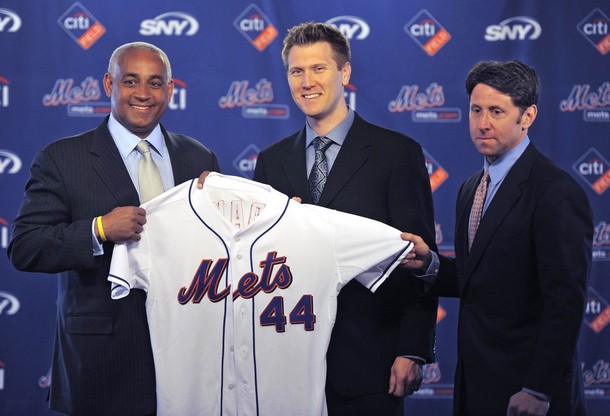 It took more than two months, but Omar Minaya finally got his man, signing Bay to a four-year, $66 million contract. Bay was the power hitter the Mets thought they needed to put them over the top. 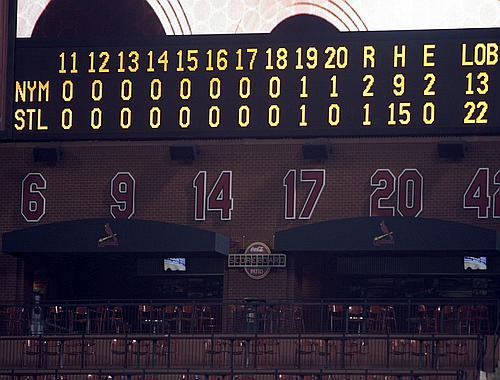 It was a game for the ages — a six hour, 53 minute marathon that saw the first 18 innings scoreless, then each team scoring a run in the 19th, and the Mets finally winning it in the 20th, 2-1. Closer Francisco Rodriguez got the win, starter Mike Pelfrey earned the save and outfielder/first baseman Joe Mather took the loss. It was that kind of game.

With his major league career less than a month old, Davis pulled off his third flip-over-the-dugout-railing catch, this one the final out of a win against the Nationals. Davis’s solid rookie year gives the Mets hope for the future.

The Mets proved, for the time being, anyway, that they were just as good as the Phillies, winning 8-0, 5-0 and 3-0 at Citi Field in the best three game series in years.

This win at Yankee Stadium was significant for several reasons. First, they beat the Yankees. Second, it extended the Mets winning streak to eight games (their second such streak of the season).  Third, they went a season-high eleven games over .500 to stand at 39-28. It marked the high point of the season as it was all downhill from there, the Mets going  40-55 the rest of way. 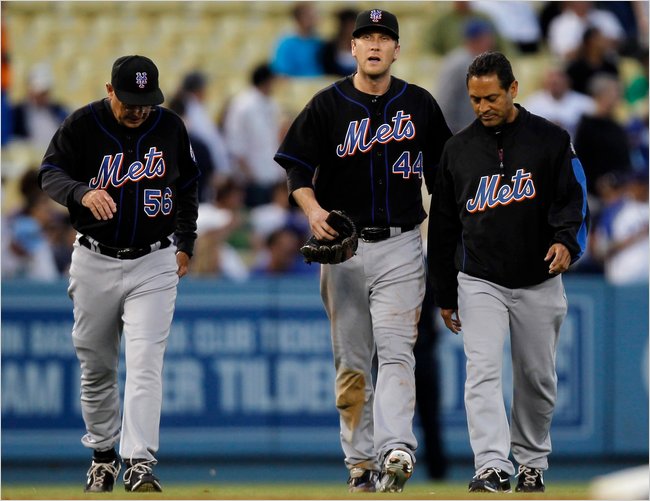 Bay somehow managed to sustain what would be a season-ending concussion while making an incredible catch at Dodger Stadium. His head didn’t even hit the fence — rather, his face hit the padding, and the whiplash effect of his head bouncing back caused the injury.

Rodriguez decided it was a good idea to slug his girlfriend’s father in full view of his teammates’ wives and children. It was a damaging punch, and not just for the victim — K-Rod was suspended, he tore a ligament in his thumb and was lost for the season, he lost $3 million, and he was arrested and charged with assault. Not his best moment.

But this was Dickey’s best moment. The knuckleballer who came out of nowhere to be the team’s MVP threw a one-hitter against the Phillies. The only hit he allowed was a single to opposing pitcher Cole Hamels in the sixth inning.

These firings were well-deserved, as Minaya was a lousy GM and Manuel was a lousy manager. These moves mark the beginning of the Mets rebuilding process. 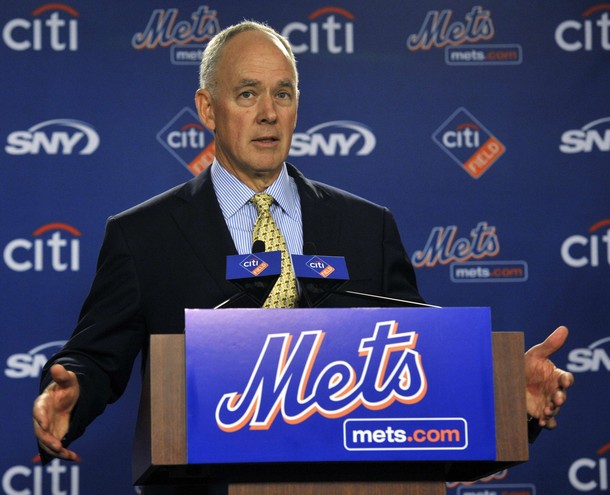 The Mets went out and got a seasoned pro to run the franchise — the first time we’ve been able to say that in a really long time. His early inactivity is likely a product of the roster and payroll he inherited. Alderson appears to have a plan that includes patience — a difficult concept for notoriously impatient Mets fans to stomach.