Chris Young made his Mets debut Tuesday night in Philadelphia, and it certainly was a good one. He allowed just one run and struck out seven in the Mets 7-1 win over the Phillies. If there was one negative, it’s that he lasted just five and a third innings, throwing 103 pitches over the short outing. It was cold and miserable in Philly, which likely played a role in that. But otherwise it was an impressive first start for Young. 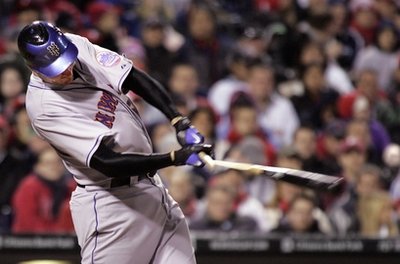 Young was excellent on the other side of the plate as well (above), going threee-for-three with an RBI. David Wright was four-for-five with two RBIs.

The Mets really have a chance to make an early statement in this series with the Phillies. They can show them that they will be a force to be reckoned with in 2011. Fate is on their side — they only have to face two of the four Phillies aces. They took care of Cole Hamels tonight, and will go up against Roy Halladay Thursday. That’s why it’s important to win Wednesday’s game against number five starter Joe Blanton, who would be a two or three on most teams.

So far the season is off to a good start — let’s hope they can keep it going.

One thought on “Forever Young”