Did anyone read that disgusting, fawning celebration of Bud Selig that Joe Posnanski wrote in this week’s “Sports Illustrated?” Let me summarize so you won’t have to endure the torture — Bud Selig is the greatest human being to ever walk the face of the earth; a combination of Jesus, Santa Claus and Abraham Lincoln (throw in a little Marilyn Monroe for glamour).

In one particularly galling paragraph, he runs down Selig’s “achievements” during his 20 year reign of terror as MLB commissioner. Posnanski’s prose are in italics, my reality checks in bold.

When Selig took over in 1992, baseball had 26 teams; now there are 30.
Almost every baseball observer believes expansion has watered down the talent pool, with dozens of players, pitchers mostly, who have no business being in the big leagues.

Four teams made the playoffs; now it’s eight.
Many purists don’t like expanded playoffs — I actually have no problem with it. 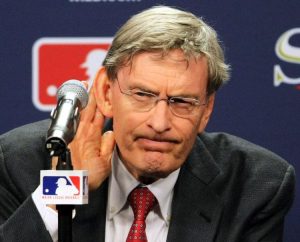 The players and owners were at each other’s throats; now there has been labor peace for 16 years.
Gee, Joe, you left out the crippling strike that canceled the World Series in 1994 and almost destroyed baseball under Selig’s watch. Hitler couldn’t get the World Series canceled; it took Bud Selig to do it.

Players were not tested for drugs; now they are tested for amphetamines and steroids.
That was after Selig ignored the steroid problem for years, claiming he had no idea what was going on. Selig is a lot of things — stupid is not one of them.

More than two thirds of teams have moved into either new or entirely renovated stadiums.
Does Selig deserve credit for this? I don’t know. But some of these new, taxpayer-funded stadiums have been a bad deal for cities.

Even some of Selig’s quirkier brainstorms—the World Baseball Classic…
Holding a meaningless tournament during spring training is ridiculous. It kept players away from their teams for weeks, and left some of them unprepared for the season.  The first time around, a rash of players who participated suffered injuries early in the season.

…have been rammed through by little more than the commissioner’s will.
Meaning he was the only one who wanted them. A commissioner must be strong and decisive, but he should not act unilaterally.

That was just a typical example of Posnanski’s love letter to Selig. I don’t mind him writing a positive article about the man, but there have been many negatives to his time on the job (especially the steroids issue) — it is irresponsible not to at least mention them.

Out of Town, Out of Luck