When Terry Collins stepped out of the dugout with two outs in the eighth inning to remove Jonathon Niese from Friday night’s game, I screamed out, “No!!!” My neighbors probably thought there was a murder going on. And there sort of was — Collins killed them game. 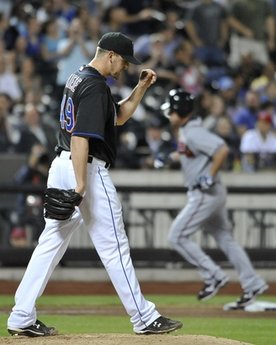 Niese had pitched 7.2 sterling innings up until that point, allowing two runs while striking out seven and walking just one. Sure, he gave up a monstrous home run to Chipper Jones to lead off the inning to cut the Mets lead to 3-2 (left), but he bounced back to get the next two batters. Then Collins came calling.

With a struggling Dan Uggla coming up (he’s batting a stunningly paltry .172), Collins opened up his predictable playbook and removed the lefty Niese to bring in the righty Jason Isringhausen to pitch to the righty Uggla. Niese had thrown 109 pitches up until that point, and he seemed to have plenty left in the tank. But Collins still made the move.

Isringhausen promptly walked Uggla, then threw a wild pitch to advance Uggla to second. Then Alex Gonzalez hit a grounder to short that somehow slipped underneath Jose Reyes’s glove. The error tied the score at three. It wasn’t all Isringhausen’s fault, but he did start things off by walking Uggla (did I mention he’s hitting .172?).

Then came the ninth — Francisco Rodriguez gave up a tie-breaking home run to Eric Hinske, then a double to Martin Prado. After an intentional walk, Freddie Freeman doubled, scoring two more runs. Freeman was thrown out at third trying to stretch the double to a triple to end the inning, but obviously the damage had been done, and the Mets lost 6-3.

The second worst part (after losing the game) was that K-Rod got credit for a game finished even though he lost the game. I wonder if Collins would have taken him out of the game had Freeman not got thrown out, as he did in last Friday’s loss to the Phillies, to avoid the game finished. I bet he would.

In any case, the Mets bullpen blew yet another game, and Niese walks away from a well-pitched game with nothing to show for it. Just a horrible, horrible loss.

The Mets are Just Awful