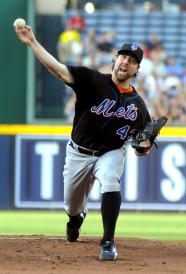 It was a wild finish to a wild game. The Mets took an early two-run lead only to watch R.A. Dickey (left), whose knuckleball wasn’t knuckling, cough it up. He left the game after four innings down 6-2. The Mets managed to tie the score at six, courtesy of a home run by Scott Hairston, of all people. They took an 8-6 lead into the ninth where K-Rod served up a game-tying two-run shot to Brooks Conrad.

Then with two outs in the tenth, Lucas Duda ranged to his right to cut off a ball he never should have touched (and should have been ruled an error) to keep the inning going, followed by the fateful balk.

It was a disappointing loss on many levels — a waste of a comeback, a chance to sweep the hated Braves, a chance to remain above .500, a chance to move within 2.5 games of the Braves and the wild card lead.

An entertaining game, certainly, but ultimately a huge letdown — we should be used to that as Mets fans!