The Mets completed the sweep of the Reds Thursday afternoon, the first time the Mets have ever swept a four-game series in Cincinnati, beating the Reds 10-9.

It was an offensive battle from the start — the Mets scored a run in the first, and then Chris Capuano didn’t wait until the sixth inning this time to allow runs, giving up two runs in the first inning.

Then in the fourth, Lucas Duda, the replacement in right field for that guy they traded, hit a double with the bases loaded that cleared the bases. Jason Bay did the exact same thing in the fifth. The Mets scored four runs in each frame to build a 9-3 lead.

Then game the sixth.

Capuano was up to his old tricks, allowing a single, a run scoring double, then a walk. Terry Collins was correctly quick with the hook this time, bringing in Manny Acosta with two men on. But pinch-hitter Miguel Cairo took Acosta long, and suddenly it was 9-7. 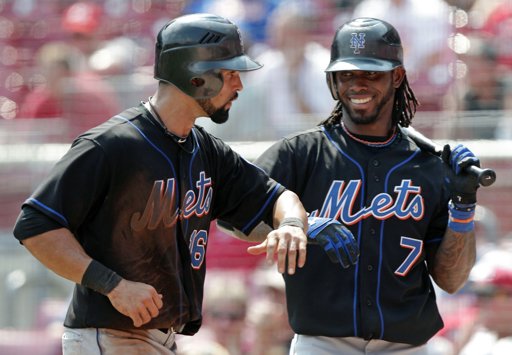 With the score 9-8, the Mets got an insurance run in the ninth when Angel Pagan scored on a wild pitch (above). Good thing, because on his first pitch in the bottom of the inning, Jason Isringhausen served up a long solo shot to Joey Votto. But he settled down to retire the side for his fourth save of the season.

David Wright was three-for-five in yet another incredible game since his comeback from the DL. Angel Pagan also had three hits. Bay had three hits and three RBIs, but he’s teased us before in these “breakout” games.

Terry Collins is very pleased with the way his team has responded to these tumultuous few days.

The Mets now take that adrenaline to Washington for a three-game series as they conclude a ten-game road trip on which they are so far 5-2.

Mets Come Back to Beat Reds