The Mets were 6-0 losers to the Marlins at Citi Field on Tuesday. Mike Pelfrey was the losing pitcher, allowing four runs in six innings, allowing six hits and four walks. Yet the Mets broadcasters felt the need to say how “great” Pelfrey pitched.

Yes, Pelfrey looked pretty good through five innings. But then in the sixth he loaded the bases on a single and two walks before pitching out of it. And then in the seventh he allowed a double, a walk, a bunt hit (more on that in a moment) and an RBI single before being lifted without recording an out. The stellar bullpen allowed the rest of his three runs.

Gary Cohen said Pelfrey’s line is not “indicative” of how he pitched. It certainly is. A player must be judged on his entire game performance, not just the good parts. If you take away all of the “bad pitches” a pitcher throws, then everyone is a Cy Young winner. 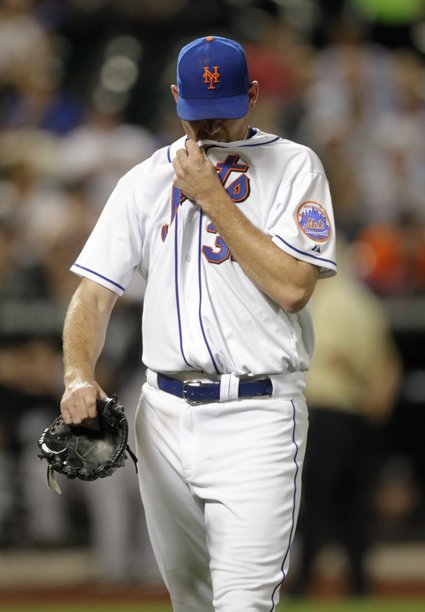 Having said that, that fateful seventh inning did turn on a play that was not his fault. With runners on first and second, Javier Vazquez was called on to sacrifice. The Mets employed some sort of wheel defense that I have never seen from them before. Both David Wright and first baseman Nick Evans came in on the pitch. The ball was bunted to Wright. He turned to third but did not throw for some reason. He then looked to first, where no one was covering (Evans was in, second baseman Justin Turner was covering second). That play is designed to go to third. Wright had to throw there but he did not. It was all downhill from there.

So the Mets lose. Pelfrey stinks.

Mets Lose to Diamondbacks in 12 Innings