Sandy Alderson spent much his his energy and most of his available budget this past winter rebuilding the bullpen. A month into the reason it appears Alderson wasted his time — the bullpen’s performance is on par with last year’s crew of relievers. 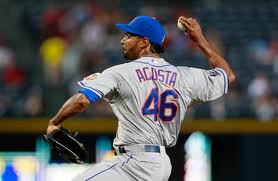 Closer Frank Francisco has five saves but also a 6.97 ERA. Ramon Ramirez has been up and down and something of a disappointment. Jon Rauch has been good, but he just had his first bad outing. Let’s hope that is not the beginning of a trend.

As far as the holdovers, Manny Acosta had a brutal road trip to raise his ERA to 9.69. Miguel Batista sports a 6.92 ERA (that includes one failed start). Only Bobby Parnell and Tim Byrdak have been pitching well.

So what can the Mets do? Well, Francisco and Ramirez are not going anywhere — they make too much money, and besides, it is far too early to give up on them.

Acosta and Batista are different stories. Acosta was pretty good for the Mets the past two of seasons, but I think we’ve seen the ceiling on him — he will never be more than just an adequate pitcher. I would give him a couple of more outings and if he doesn’t turn things around, then he’s gone.

Batista is 74 years old, so maybe his time has come.

The Mets have some decent relievers in the minors. Robert Carson, who was briefly on the team but saw no action, is pitching well down in Binghamton. Plus he’s a lefty; the Mets could use another one in the pen.

Another lefty, Chuck James, is pitching well in Buffalo. Fernando Cabrera is Buffalo’s closer and so far has a 0.79 ERA and five saves. But these guys are both only 20, so perhaps they are not ready.

Alderson has shown a willingness to admit his mistakes and move on (Blaine Boyer, anyone?), so if these poor performances continue, I think we’ll see Alderson make some moves to get rid of the offending pitchers.

What Does Steven Matz Deal Mean for Trevor Bauer Pursuit?