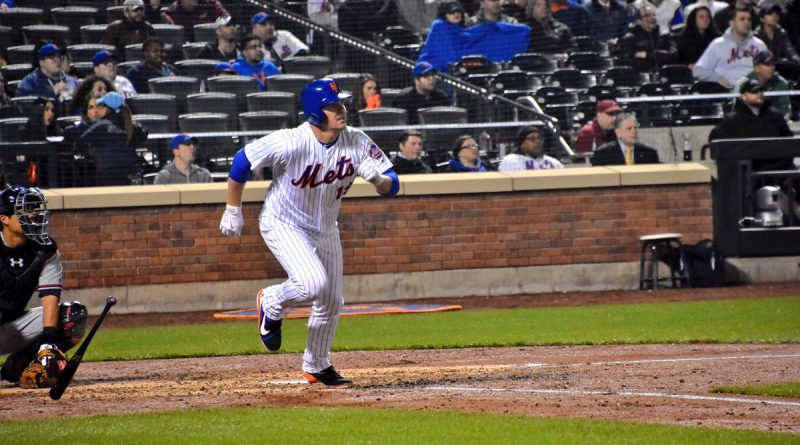 Bartolo Colon returned to Citi Field Wednesday night, receiving a hero’s welcome. But he was long gone when the Mets finally lost to the Braves in extra innings.

Colon and Jacob deGrom traded zeroes for the first four innings, but in the fifth, Bruce connected on a solo home that hit the top of the wall and bounced over it.

Hansel Robles came on for the seventh; it was not pretty. Nick Markakis hit a one-out triple and he walked Brandon Phillips. Adonis Garcia doubled over Bruce’s head to tie the game. Poor baserunning by Phillips kept him at third, proving costly. With runners on second and third, Robles hit Kurt Suzuki to load the bases. And that was all for Robles. Jerry Blevins came in to face Emilio Bonafacio, pinch hitting for Colon. Blevins struck him out on a full count for the second out. Ender Inciarte grounded out to first to end the inning.

Bartolo Colon’s linescore was nearly identical to deGrom’s — two hits, six strikeouts and one walk over six innings. The only difference was that one run.

Fernando Salas was able to get out of a first and second with two outs situation (including the Mets first-ever no-pitch intentional walk) in the eighth to keep the game tied.

It was on to extra innings. With one out in the tenth, Bruce hustled his way to a double to get into scoring position. Lucas Duda was intentionally walked, but Travis d’Arnaud and pinch hitter Ty Kelly each struck out to keep the game going.

With Rafael Montero on the mound in the 11th, a walk and a single put runners on first and third with one out. But he got Garcia to ground into a double play to get out of the jam and end the inning.

Montero also ran into trouble in the 12th, but this time he couldn’t get out of it. A single and walk put runners on first and second with one out. Dansby Swanson grounded out to first for the second out. Freddie Freeman was intentionally walked to load the bases and then Matt Kemp hit his third double of the night to drive in two to give the Braves a 3-1 lead. Josh Smoker came on with runners on second and third with two outs. He was able to strike out Markakis to end the inning.

Bruce collected his third hit with two outs in the bottom of the 12th, but Lucas Duda struck out to end the game.

Mets lose their first game of the season, 3-1.

Mets Lose to Marlins in 10 Innings