How do you think R.A. Dickey felt coming out of Wednesday’s game against the Marlins, turning a 1-0 game over to the Mets porous bullpen? Pretty nervous. But fortunately Bobby Parnell was nowhere in sight.

Dickey and his knuckler dazzled through seven shutout innings, allowing just four hits. I really thought he would finish the game himself, however Terry Collins lifted him after the seventh.

Instead of the Isringhausen-Parnell combo which has not been the most reliable of late, Collins called on newcomer Josh Stinson and Manny Acosta to close out the game. In his fourth appearance Stinson was excellent once again, then Acosta pitched a perfect ninth for his first save of the season (below). 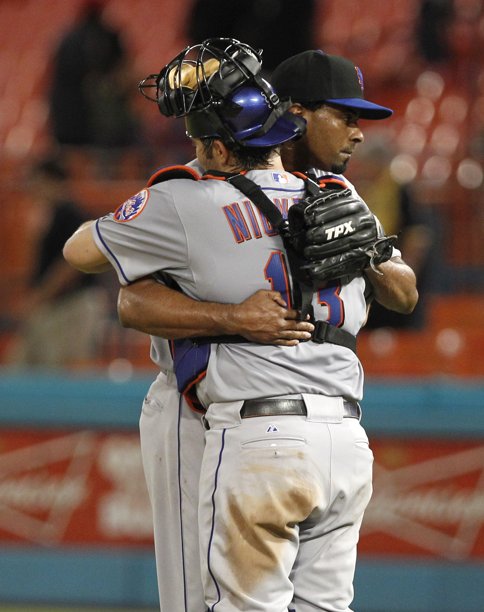 Lucas Duda provided all of the necessary offense with an RBI double in the first inning.

Now the Mets go home to face the Braves in a doubleheader on Thursday that are make-up games from the ones washed out by Hurricane Irene. Then they play a weekend set with the lousy Cubs. Hopefully the 70-71 Mets will come out of the weekend as a .500 team or better. Didn’t I saw that about last weekend?