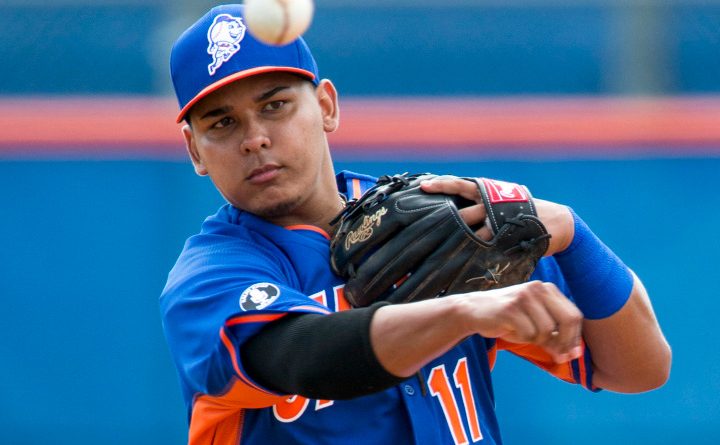 Ruben Tejada committed an error on what was described as a routine grounder in Thursday’s Mets Spring Training win over the Nationals, his third error in six games. It is reminiscent of his poor 2013 start, which means nothing has changed and it is time to give Tejada the boot.

The Mets were willing to give Tejada a second chance after he voluntarily attended multiple sessions of that conditioning camp in Michigan this winter. In addition to his poor play in the field, Tejada also has just one hit in 15 at bats. Can the Mets really go into the season with Ruben Tejada as the starting shortstop?

They might have to because there may be no reasonable alternatives. The Mets just will not spend the money on Stephen Drew, nor should they if he is demanding upwards of $14 million per season on a multi-year pact.

The Mets are reportedly monitoring the Mariners Nick Franklin and the shortstop competition in Arizona between Didi Gregorius and Chris Owings. Both teams reportedly want at least Rafael Montero in return. Arizona also is said to like catching prospect Kevin Plawecki.

Montero looks too good to give him up for one of those three shortstops. At some point the Mets will likely have to deal some of their young arms; after all, there are only five spots in the rotation and they have multiple holes to fill. To sacrifice someone like Montero, the Mets would have to get a sure thing in return, a game-changer. These three players are nice and certainly are an upgrade over Ruben Tejada, but not at the cost of Montero.

I would deal Plawecki and a lesser pitching prospect to Arizona for one of the shortstops. If Travis d’Arnaud is as good as he’s supposed to be, they will not need Plawecki.

The best option for the Mets right now could be to give Wilmer Flores the starting job. The idea of a Flores-Daniel Murphy double play combination sends shivers down the spines of all Mets fans, but at least we know he can hit. If his fielding is adequate, it would be a decent tradeoff.

Either way, Ruben Tejada just cannot be the Opening Day shortstop. But we all know he will be.

First Base Bigger Problem than Shortstop for Mets

One thought on “Time to End Ruben Tejada at Shortstop”