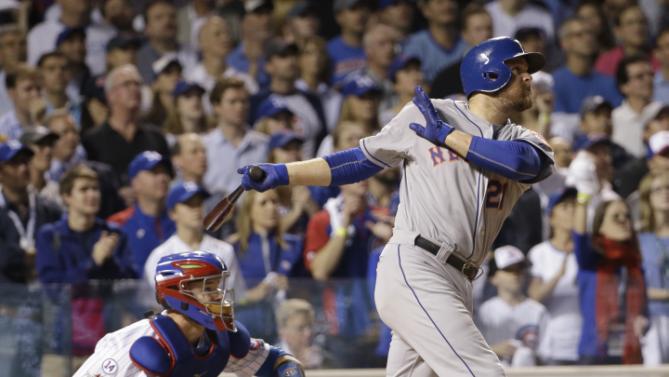 Lucas Duda did not play for a second straight game on Sunday, and the Mets could find out Monday if Duda will be out for far longer.

Duda has a back issue which has already undergone testing. The results will be reevaluated on Monday and an announcement should follow.

“I don’t have any expectations yet. I’m real concerned, there’s no question,” Terry Collins said. “I’m really concerned this is going to keep this guy out for a while, but that’s just me. I’m not the doctor.”

Lucas Duda is having a miserable year. He has seven home runs and 19 RBIs but is batting only.231. Even more disturbing is his .297 on-base percentage, 50 points below his career average. He just is not walking (11 on the season), which is his calling card and is so valued by the Mets. The back issue could explain the hitting, but it does not explain his sudden poor eye at the plate.

David Wright, dealing with back issues of his own, makes it sound like the prognosis will not be a good one.

“Certainly we’d like him in there as soon as possible, but at the same time, we’d like a healthy Lucas Duda, not have him play through what he’s played through,” said Wright. “It’s something you gotta take care of, and hopefully we can hold down the fort while he’s gone. Obviously he’s an integral piece here, but we’ve got guys that can step up and fill in.”

Really, who would that be? Eric Campbell? No. Campbell has been getting a lot of playing time recently, filling in for both Wright and Duda. He has started 10 of the past 14 games, going 7-31 (.226) with just one RBI, four walks and 11 strikeouts. As we have learned over the years, Campbell is an acceptable bench piece, but he is exposed as a starter.

Of course, Wilmer Flores would have gotten most of those at bats, but he is on the DL with a bum hamstring. He is due to be activated on Friday. But he was hardly tearing it up, batting .180 with a homer and two RBIs before being forced to the sidelines. And he is untested at first base; it is not known if he can be a long-term answer if Duda is out for a while.

This is what happens when you go into the season without a true backup first baseman.

Another option is to move David Wright to first. His throwing is only getting worse, so he will likely have to be moved there at some point over the next few years. Why not try it now? Well, it would be a lot to ask of a player to learn a brand new position in the middle of a pennant race. Wright deserves a Spring Training to get comfortable there.

The Mets really have no good options in house, and Dominic Smith isn’t close to being ready. Maybe they could move Alejandro De Aza to an outfield-starved/first basemen-heavy team?

Who knew Lucas Duda was so irreplaceable?!

First 2 Games Mets in a Nutshell?