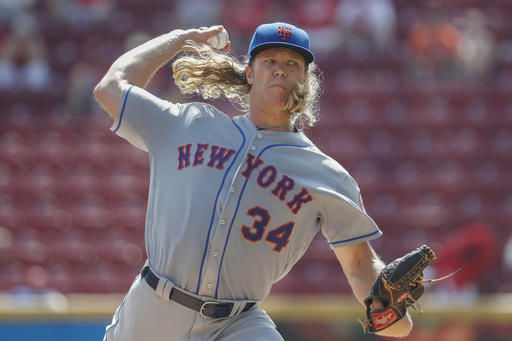 The Cardinals lost Wednesday night, which means the Mets are now tied with St. Louis for the second Wild Card. Two weeks ago, no one thought that would ever happen.

The Mets are winners of five games in a row, while everybody else in the chase has gone cold. The Cards have been just average lately, while the Pirates and Marlins have hit the skids. It really was not a bad thing that the Cardinals came back to beat the Pirates Tuesday night to keep the Mets a game back — it helped to further bury the Bucs. Now they only have one team to worry about.

And the first Wild Card spot is suddenly up for grabs as well. The Giants have been sputtering and the Mets are just a half game behind them after a stunning loss late Wednesday. How nice would it be for the Giants to have to come to Citi Field instead of the Mets having to get on a cross-country flight?

The Mets have the easiest schedule of any of the teams in the running; just one team (the Nationals) is above .500. So all they have to do is keep winning and they’re in. Given the injuries that have plagued them all season long, it is quite extraordinary that we are even talking about the playoffs. But here we are. And we all know once you get into the tournament, anything can happen. So basically, don’t make plans for late October.

What’s with All the Mets Home Runs?!

It was Never Going to be Easy for Mets

Mets Should Go for it!